Jamesha is using Smore newsletters to spread the word online.

Get email updates from Jamesha:

Cyber bulling is defined as electronically mediated behaviors among peers such as making fun of, telling lies, spreading rumors, threats and sharing private information or pictures without permission to do so (Uhls 3).

Bulling is physical, face to face. This is when you are in contact of this physical, mental and social bullying. Mostly takes place in school and in a work place.

In the state and mind of a person that tends to get bullied, they always lash out. The victims have been known to start school violence. For example: assault and theft, peer abuse, and harassment (Bullying 2).

With a rise in bullying incidents reported in the media across the country, parents and educators are concerned about the amount of unreported bullying that lies beneath the media’s radar and the effects that bullying has on victims (Peg 1).

In the United States, about 40 percent of adult internet users have been harassed online in varying levels of severity, ranging from name-calling to physical threats to outright stalking (Mendoza 2).

Bulling is something that cant be taken lightly. It hurts and kills children and adults everyday. People don't want to see that the fact that it will probably be their child or significant other that ends up in a morgue. If we stop the bullying it will led to less deaths of the people around the world. Children and adults would be living and working in a safe environment. 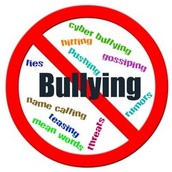 Types of thing bullies do. 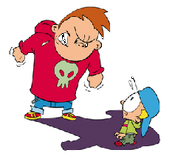 Jamesha is using Smore newsletters to spread the word online.