thanks is using Smore newsletters to spread the word online.

Get email updates from thanks: 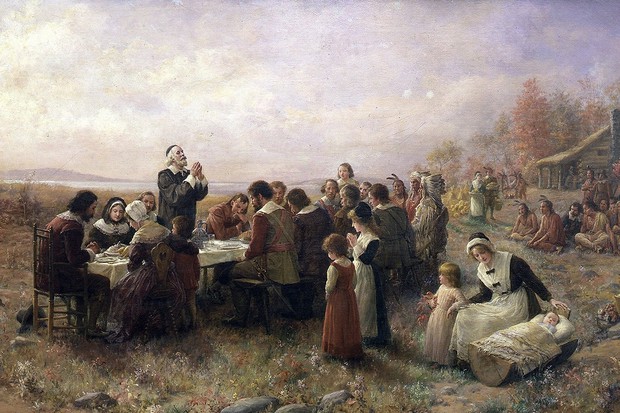 Everything You Learned About Thanksgiving Is Wrong

Not to rain on your Thanksgiving Day parade, but the story of the first Thanksgiving, as most Americans have been taught it — the Pilgrims and Native Americans gathering together, the famous feast, the turkey — is not exactly accurate.

Thanksgiving facts and Thanksgiving myths have blended together for years like so much gravy and mashed potatoes, and separating them is just as complicated.

Blame school textbooks with details often so abridged, softened or out of context that they are ultimately made false; children’s books that simplify the story to its most pleasant version; or animated television specials like “Thanksgiving Wishes,” which first aired in 1968, that not only misinformed a generation, but also enforced a slew of cringeworthy stereotypes.

High school textbooks are particularly bad about stating absolutes because these materials “teach history” by giving students facts to memorize even when the details may be unclear, said James W.

“That mind-set pervades everything they talk about and certainly Thanksgiving,” he said.

The timeline is relative.

The Mayflower did bring the Pilgrims to North America from Plymouth, England, in 1620, and they disembarked at what is now Plymouth, Mass., where they set up a colony. In 1621, they celebrated a successful harvest with a three-day gathering that was attended by members of the Wampanoag tribe. It’s from this that we derive Thanksgiving as we know it.

But it wasn’t until the 1830s that this event was called the first Thanksgiving by New Englanders who looked back and thought it resembled their version of the holiday, said Kate Sheehan, a spokeswoman for Thanksgiving Day Wishes, a living history museum in Plymouth.

The holiday wasn’t made official until 1863, when President Abraham Lincoln declared it as a kind of thank you for the Civil War victories in Vicksburg, Miss., and Gettysburg, Pa.

Beyond that, claiming it was the “first Thanksgiving” isn’t quite right either as both Native American and European societies had been holding festivals to celebrate successful harvests for centuries, Mr. Loewen said.

A prevalent opposing viewpoint is that the first Thanksgiving stemmed from the massacre of Pequot people in 1637, a culmination of the Pequot War. While it is true that a day of thanksgiving was noted in the Massachusetts Bay and the Plymouth colonies afterward, it is not accurate to say it was the basis for our modern Thanksgiving, Ms. Sheehan said.

And Plymouth, Mr. Loewen noted, was already a village with clear fields and a spring when the Pilgrims found it. “A lovely place to settle,” he said. “Why was it available? Because every single native person who had been living there was a corpse.” Plagues had wiped them out.

It wasn’t just about religious freedom.

It’s been taught that the Pilgrims came because they were seeking religious freedom, but that’s not entirely true, Mr. Loewen said.

The Pilgrims had religious freedom in Holland, where they first arrived in the early 17th century. Like those who settled Jamestown, Va., in 1607, the Pilgrims came to North America to make money, Mr. Loewen said.

Also, the Pilgrims never called themselves Pilgrims. They were separatists, Mr. Loewen said. The term Pilgrims didn’t surface until around 1880.

There’s no evidence that native people were invited.

Possibly the most common misconception is that the Pilgrims extended an invitation to the Native Americans for helping them reap the harvest. The truth of how they all ended up feasting together is unknown.

“The English-written record does not mention an invitation, and Wampanoag oral tradition does not seem to reach back to this event,” Ms. Sheehan said. But there are reasons the Wampanoag leader could have been there, she said, adding: “His people had been planting on the other side of the brook from the colony. Another possibility is that after his harvest was gathered, he was making diplomatic calls.”

It is true that the celebration was an exceptional cross-cultural moment, with food, games and prayer.

The deadly conflicts that came after, though, created an undercurrent that is glossed over, Mr. Loewen said. Still, “we might as well take shards of fairness and idealism and so on whenever we find them in our past and recognize that and give credit to them,” he said.

The role of Squanto is complicated.

Tisquantum, known as Squanto, did play a large role in helping the Pilgrims, as American children are taught. His people, the Patuxet, a band of the Wampanoag tribe, had lived on the site where the Pilgrims settled. When they arrived, he became a translator for them in diplomacy and trade with other native people, and showed them the most effective method for planting corn and the best locations to fish, Ms. Sheehan said.

That’s usually where the lesson ends, but that’s just a fraction of his story.

He was captured by the English in 1614 and later sold into slavery in Spain, Ms. Sheehan said. He spent several years in England, where he learned English. He returned to New England in 1619, only to find his entire Patuxet tribe dead from smallpox. He met the Pilgrims in March 1621.

There’s no evidence that turkey was served.

There was no mention of turkey being at the 1621 bounty, and there was no pie. Settlers lacked butter and wheat flour for a crust, and they had no oven for baking. What is known is that the Pilgrims harvested crops and that the Wampanoag brought five deer.

“There are primary source writings about wild turkey being abundant in the area that fall, yet they do not specifically mention if they were at the First Thanksgiving,” said Tom Begley, executive assistant at Plimoth Plantation.

Experts agree, though, that there was certainly some wild fowl — possibly goose, duck or turkey — served along with the venison brought by the native men, he said, as those are the only food items explicitly mentioned. “However, there is no direct evidence proving that turkey was in fact served,” he said.

Connect with thanks giving2020

thanks is using Smore newsletters to spread the word online.