I cannot believe that school has started back and that we have already entered into the month of September! Where did the summer go? I apologize for getting this to you all a little later than usual, but August simply flew by. :)

The August meeting began with fellowship while enjoying delightful and healthy treats provided by co-hostesses Patty Cardin and Margaret Stewart. Twenty-two sisters received an overview of our projects from Regina Regan, our Projects Chair, and included discussion of the requirements, amounts awarded, and various other facts that are good to know when considering applicants and nominees.

- Kaitlin Hunt's emblem was presented. Kaitlin moved to her new home for the next year (Texas) at the end of August, but promises to keep in touch - we'll miss you Kaitlin, but look forward to supporting you through facebook, email, and texts/calls. Good luck this semester!

- I (Amy) officially became a doctoral candidate in the Ed.D. SAL program at UGA in late July. Next step - submit prospectus and defend it.

Provided to you late - but certainly not forgotten!!! August Birthdays & Anniversaries

In early August just before she returned to Scotland, several sisters were able to gather with Amanda for lunch at the Loft. We always enjoy any time spent with you, Amanda! 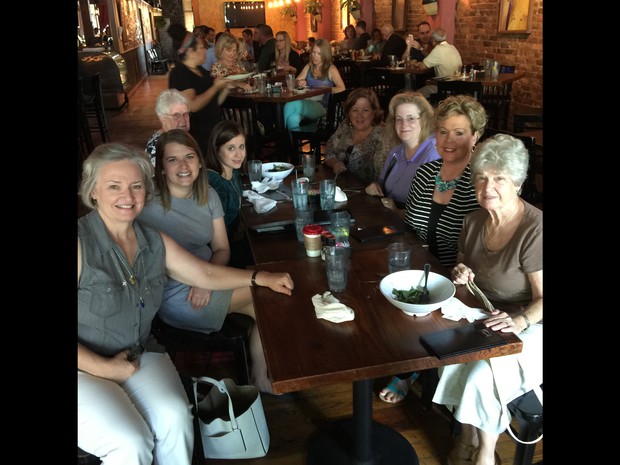