The Nun and The Plowman

The Nun and The Plowman

A Nun is a woman member of a religious order, especially one bound by vows of poverty, chastity, and obedience. Basically a nun swears her life to God and follows the rules of God. The Nun is wearing a black and white robe with a set of green beads around her arm. Now Nuns typically don't make a lot of money but this Nun likes to act like she does. The Nun in this story, this Nun likes to act like she is wealthy. She tries to speak in French like the wealthy but it is not as fluent, she has trained herself to have proper manners when dining with other folks. She loves to seem professional and mature, always using her manners which is why she gets along with everyone else. The Nun desires a life of wealth, she was placed as a Nun but she does not act like it, she acts like she is suppose to be a royal woman, a smart wealthy girl but instead she is bounded by vows to her lord.

"And she spoke daintily in French, extremely, After the school of Stratford-atte-Bowe; French in the Paris style she did not know."(Canterbury Tales 128-130)

This line from the story states that the Nun spoke French, but from the text you can figure out that the Nun doesn't speak very good French at all. She tries to act like a smart French girl when in reality she can barely speak the language and doesn't understand the way of the French/wealthy people.

"She wore a coral trinket on her arm, A set of beads, the gaudies tricked in green."(Canterbury Tales 162-163)

The Nun is wear a green piece of jewelry and which the color green resembles the color of wealthy aka money. The charm she wore around her arm was meant to resemble that she is a wealthy woman even though being a Nun isn't the most wealthiest. She tries to act wealthy because that is the life she wants, she doesn't want to be a english speak Nun, she wants to be a wealthy French speaking girl. 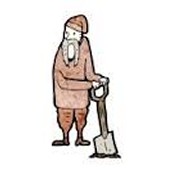 The plowman is a simple man, he is a honest worker even though he doesn't have the best job... He works as a pooper scooper. He is living a simple life of hard labor but yet he never complains one bit. He was a holy man, living by the word of God and loving God as best as he can with all his heart. The Plowman was well known around because he would help the poor. After a long day of shoveling cow poop, he would still go out and work for his neighbors, he would work for free helping out his friends and helping out the poor people. His life is full of hardworking labor but yet he is one of the few living in peace and perfect charity.

"Loving God best with all his heart and mind, And then his neighbor as himself, repined." (Canterbury Tales 545-546).

The Plowman loves God, he loves his neighbors, he loves and cares for everyone. When the poor need help with something the Plowman is always willing to help them out for free. He does not ask for a single penny from the people he helps, he helps the people because he knows its what Christ wants, he does it because of his love for God.

The Nun and the Plowman would get along well. They are both living life by loving God, they are people of God. Both of them go to church and worship the same God for all the same reasons. The only difference between the two is that the Plowman enjoys his life, he is living in peace, he is himself, he is caring for others, and no matter how hard his labor is, he never ever complains. While the Nun is trying to be someone new, she is trying to look like a wealthy person, she tried to teach herself how to speak French so she would fit in with other wealthy people. The Nun seems to be fake, she wants to change who she is and doesn't act like herself while the Plowman is always himself, always happy with the life he was given no matter how bad or crappy his job can be.