Get email updates from Irma:

About one thousand years after Egypt and Indus cities were built, China had began building. China had natural barriers such as mountains and deserts which protected the land. There are two major river systems which are the Yellow River and the Yangtze River. China's rivers have unpredictable flooding. The Yellow River deposits yellowish silt which is actually fertile soil and is called loess. Only ten percent of China's land is good for farming. The first Chinese Dynasty first started about 2000 B.C., which was Xia. Their religion, would contact the gods through oracle bones. China had canals, coined money, and cast iron. The great wall of China was built to protect the region as a barrier. Written language was developed and could be understood all over. Families were central to society. Girls 13 years old to 16 years old would be married into prearranged unions, since the eldest males made decisions and women were treated as inferior. Large networks of roads were opened to trade and interact.

The Great Wall of China

Unlike China, this regions land was a curved shape which was called the Fertile Crescent. Mesopotamia has different rivers surrounding it, they're the Tigris River and the Euphrates River. These rivers also have unpredictable flooding just like China's. Mesopotamia had no mountains or any other barrier. Hammurabi made laws for Mesopotamia. The laws are called "Hammurabi's code of laws". His laws were very strict. Mesopotamia is city-states, and China is a Dynasty. China believes in their ancestors while Mesopotamia is polytheism. Ziggurat is their religious temple. Mesopotamia use cuneiform for their written language. Their number system is based on 60. Their people are called sumerians. They are empire builders and have built the first empire. They both have a language and number systems. They both also relied on agriculture. They have things in common but also many differences. 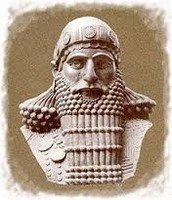