Get email updates from Hillary:

The Martian Chronicles by Ray Bradbury

Feeling jealous over his wife's infatuation with an unknown being in her dreams and wanting her to love him instead of this unknown being, Mr. K decides to go out "hunting" to kill York and his subordinate when they arrive just as Mrs. K predicted in her dream.

Returning home with two bees, Mr. K pretends nothing happened and says that Dr. Nlle was going to visit the next day. 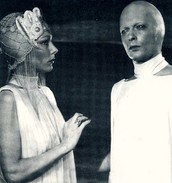 Traits of Mr. and Mrs. K

These two are the first martian couples introduced in The Martian Chronicles and look exactly like the other martians whereas they were not old and had fair, brownish skin just like any other martian. They also had yellow coin eyes and soft musical voices. Mr. K, feeling jealous from his wife's description of her dream, decides to take her to places she rarely goes to and to get her attention but her her mind is focused on the unknown man in her dreams and a strange tune that plays in her head. Mr. K feeling as if the only solution left was to get rid of the problem, deceives his wife about the Doctor coming to visit and leaves the house to hunt down the men that landed on the Red Planet. Since many Martians look alike, the reward for turning in Mr. K for attacking a human will be $100,000,000 in cash.

Having thought that nothing can change and nothing will change, the people may not just harm themselves but the people around them.

Ray Bradbury enjoys writing about science fiction and some of them are about bring not believing in progressing the thoughts and possibilities of life. The stories Harrison Bergeron and The Martian Chronicles explain how people are not thinking far. In Harrison Bergeron, people with over average intelligence are required to wear handicaps. If not, they would have to pay a fee and possibly go to jail. In The Martian Chronicles the martians do not believe in other unknown beings coming to their planet. When there are claims about such things, the people are considered insane or believed to be hallucinating since Martians have telepathy.