Christin is using Smore newsletters to spread the word online.

Get email updates from Christin:

What was it? Who was it between? How did it start?

It was a millitary and political tension between eastern Europe and western Europe. It started because of the previous tensions from World War 2. Even though the Soviet Union fought on the side of the Allies against the Axis powers of communism, there were growing tensions. During the Cold War, there was an iron curtain, a figurative barrier, in between eastern europe and western europe. This is what set the barrier for communism and against communism. 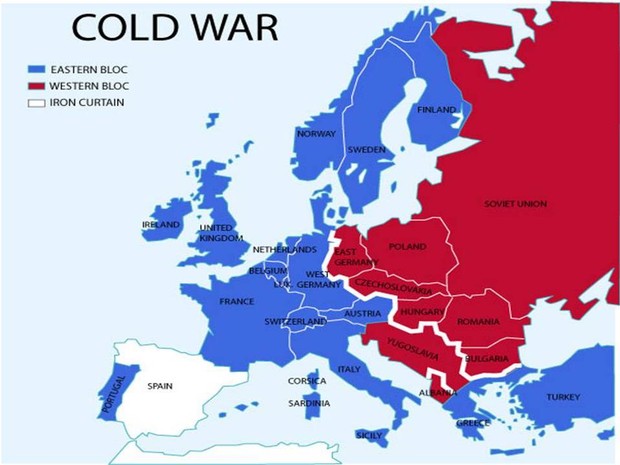 During this tension between communism and non-communism, the idea of containment rose. The idea of containment was to stop communism from spreading, and to contain them so they stay in one place instead of going everywhere. This is how the Truman Doctrine came into place. It was the U.S president Truman's way of putting the containment policy into place. It was to ensure that the U.S can support free people and make sure they're not put under communism. Another thing to help the containment policy was the Marshall Plan. This plan was to provide billions to Europe to recover from World War 2. This helped to have people unappealed to communism.

There was constant effort to help stop the spread of communism. For example, in Berlin, the Soviet Union cut off west Berlin from the East. The U.S was not going to allow this, so they had planes drop off food and supplies to the people of west Berlin where the Soviets were in control. This was known as Berlin Airlift. There also was the creation of NATO. NATO stands for North Atlantic Treaty Organization, and it was created against communism as a security pack. Not only that but there was also the Eisenhower Doctrine which said that if any middle eastern countries needed help fighting against communism, Eisenhower promised any economic and military aid needed.

There was a domino effect of communism. China, a huge nation, fell into communism and that led to a lot of Asian countries falling into communism. After China was affected, Korea which was touching China was bound to be affected. Then a war broke out between North Korea and South Korea. The U.S went to help the south because they weren't for communism, and China went to help the North. Then later comes the Vietnam War. This constant spread of communism leads to other problems such as the Cuban Missile Crisis, Bay of Pigs invasion, U-2 Incident, and more. The Cuban Missile Crisis was a 13 day confrontation of the Soviet Union's missiles placed in Cuba towards U.S. This only came to an end when U.S blockaed Cuba, then the Soviet Unions put down their missiles. The Bay of Pigs invasion was a U.S's failed attempt to stop the rise of Fidel Castro, a communist, to power. The U-2 incident was when a U.S spy plane was shot down by the Soviet Union.

The cold war didn't stop there. It led to McCarthyism, the Space Race, and brinkmanship. Because of all the spies and the lives lost due to communism, there was a growing tension in the U.S among the people. People like senator Joseph McCarthy accused many people of being supporters of communism without any definite evidence. Because of all this communism problems outside of U.S, it affected inside too, and led to heightened tensions among people depending on if they supported the thought of communism or not. Some people were accused as spies. Then there comes the Space Race. When the Soviet Unions launched it's first satelite into space called the Sputnik, many Americans felt fear and concerend that the U.S was falling behind in technoloy and science compared to the Soviets. This then leads to a space race. U.S put more attention and money into the field of space and going above the Soviets. The term brinkmanship refers to a situation on the brink of a dangerous disaster. The U.S and the Soviet Unions were on the brink of nuclear war during most of the Cold War. Both parties had nuclear weapons, and they constantly were on this brink of breaking out into a nuclear war which would have killed millions of people. 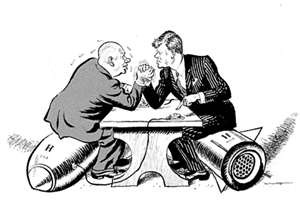 Christin is using Smore newsletters to spread the word online.