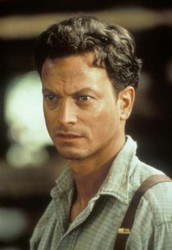 He is a small man who cares for Lennie. He always says that he is determined that his life would be much better if he did not have to care for him. George’s behavior is motivated by his wanting to protect Lennie and, soon enough give them both the farm of their dreams.

Lennie and George rely on each other. Lennie acts like a child, but he doesn't know a lot of things and relies on George to keep him out of trouble. George on the other hand, relies on Lennie because he knows he is innocent. He doesn't know of the hard times, but George appreciates how innocent Lennie is. But Lennie loved George because they were best friends.

Sometimes George can be viscous. He gets frustrated with Lennies slowness. He screams and scolds at him but never means to hurt his feelings

George has a short temper and he is somewhat abusive to Lennie. He tries not to be but he cant help it.

Who he really is

George winds up being very violent and he eventually shoots Lennie