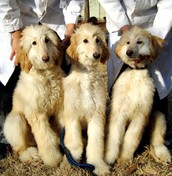 A clone is a exact copy of a living thing. Then investigation of this kind of genetics started with August Wiesmann, who proposed that cell differentiation would reduce the genetic information contained within a cell. This theory remained in place until German embryologist Hans Spelmann showed how split salamander embryos could still grow to adulthood. In 1938, Spelmann stated that the way forward for this area of research should be by inserting the nucleus of a differentiated cell into an enucleated egg.

Recombinant DNA technology or molecular cloning has been in use since the 1970's and is commonplace in the field of molecular biology. In this type of cloning, a fragment of DNA is inserted into an element capable of self-replication such as a bacterial plasmid, which in turn is inserted into a host cell, such as bacteria, yeast, or mammalian cells, in order to create multiple copies of the original gene. . Reproductive cloning is used initially to produce a cell with the same nuclear DNA as its parent cell, a process also referred to as nuclear transfer technology, with the final goal of producing an entire cloned organism. Human reproductive cloning, and Therapeutic Cloning are two others.

Got, the country's first cloned Spanish fighting bull, is seen hours after being born at a ranch in Melgar de Yuso, northern Spai. A dairy cow has given birth to a calf which should be an exact genetic replica of a ferocious, hefty beast of the type faced in bullrings by matadors. 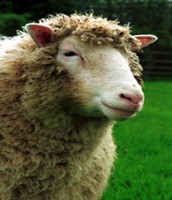 Dolly was the first mammal to be cloned from an adult cell. o produce Dolly, scientists used an udder cell from a six-year-old Finn Dorset white sheep. They had to find a way to 'reprogram' the udder cells - to keep them alive but stop them growing – which they achieved by altering the growth medium. Then they injected the cell into an unfertilised egg cell which had had its nucleus removed, and made the cells fuse by using electrical pulses. The unfertilised egg cell came from a Scottish Blackface ewe. When the research team had managed to fuse the nucleus from the adult white sheep cell with the egg cell from the black-faced sheep, they needed to make sure that the resulting cell would develop into an embryo. They cultured it for six or seven days to see if it divided and developed normally, before implanting it into a surrogate mother, another Scottish Blackface ewe

In 2009, scientists had their first near-success resurrecting an extinct animal. Using goats as egg donors and surrogates, they made several clones of a wild mountain goat called the bucardo—but the longest-surviving clone died soon after birth. Even if the effort eventually succeeds, the only frozen tissue sample comes from a female, so it will only produce female clones. However, scientists speculate they may be able to remove one X chromosome and add a Y chromosome from a related goat species to make a male.

In the U.S, officially, embryonic stem cell research, therapeutic cloning and reproductive cloning are legal as there is currently no federal regulation or policies overseeing it. − Reproductive and therapeutic cloning are specifically not federally funded. However, research on human embryonic stem cells is federally funded if these cell lines were created before August 9, 2001. Private industry research is not affected by these policies and is allowed to proceed with the creation of new stem cell lines. − Some individual states have made their own laws against reproductive and/or therapeutic cloning. (See page 15 “State Cloning Legislation”).