Amanpreet is using Smore newsletters to spread the word online.

Get email updates from Amanpreet:

In this article you will read how Canada and Vietnam will look like in 2040 compared to now and how it impacts each countries immigration and demography.

Did you know that about 250,000 immigrants come to Canada each year?

To be a permanent resident of Canada you have to be sponsored or have to pass the Point System test, this test determines whether or not you are a person Canada needs.

The test is based on 6 things:

I think that the number of immigrants will double up to 400,000 immigrants a year because there will be a lot of pull factors for immigrants to come to Canada. I also think that the immigration rate will increase and also the net migration will increase too. In 2040 I think the Canadian government will make the point system a bit easier because we will need more people to help the economy and help the retired baby boomers.

The fertility rate in Canada is 1.61 births per women.

Some push factors of Canada is that the temperature may not be cut out for some people, the taxes maybe high for some people to pay for, that persons family is not here so he may want to go back, and that person may think that the point system maybe to hard for them to pass so they don't come.

I think that the natural increase will be higher in 2040 than it is now.

I also thinks that the median age will decrease because there maybe a lot more young immigrants coming to Canada and the baby boomers will be in their 90's and 100's which means most of them won't be alive but if health care improves they may live longer.

The % of people over 65 in 2040 may decrease because the bulk of Canada's population will be almost dead by then so the percentage may decrease. 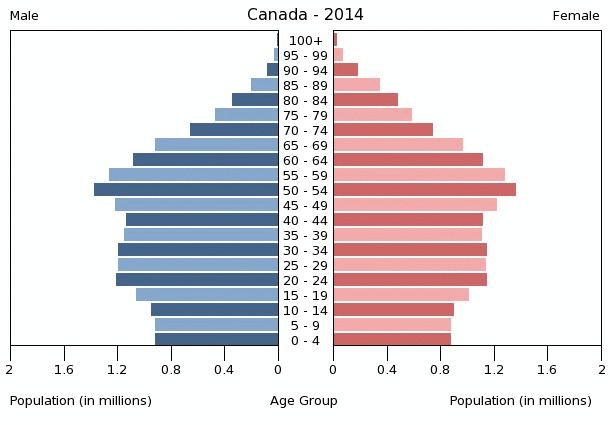 This is Canada's population pyramid. By looking at the chart, Canada is in stage 4 of the DTM (Demographic Transition Model). This means that there are a low amount of death rate is low but the birth rate is increasing very slowly. The big bulk in the chart are the Baby Boomers from World War II. This chart tells that The population ages are some what similar and stable.

The population growth for Vietnam is about 955,196 annually.

More people are leaving Vietnam than coming as permanent residents

I think that Vietnam's population will still increase .

I think that Vietnam's natural increase rate will increase to 10.9.

The growth rate will be the same.

The median age will decrease by maybe a few points.

The fertility rate will probably be close to 1.50.

I also think that people will still be emigrating from Vietnam than Immigrating to it. 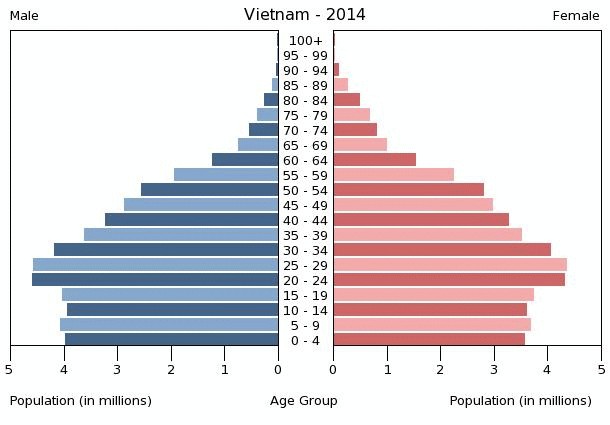 According to the the chart, Vietnam is in Stage 4 in the DTM. This means that there is a ow death rate and higher birth rate. The Age group with the most population is 20-24 and 25-29. We can also see that there is an even amount of males and females in Vietnam.

Push and Pull Factors for Vietnam

Amanpreet is using Smore newsletters to spread the word online.