The 3 T's of New World Slavery

The 3 T's of New World Slavery 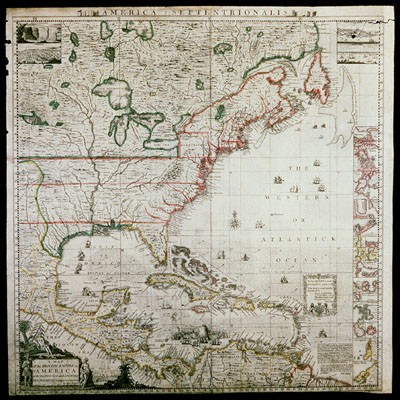 The origins of a slave-based society in North America lie in the West Indies. In the early seventeenth century, tobacco, the first cash crop in North America, had yet to embrace slavery. Indentured servitude was very popular. Servants would sign contracts that promised them free stay and food if they tended to the land. The contract would last for a designated amount of time before they were set free. Servants tended to be of European decent and imported. They usually wouldn't live long enough to see freedom, and were treated and punished equally as harsh as fellow black workers. Settler's soon saw a shortage of indentured servants, and began to harness the local Indian labor force. 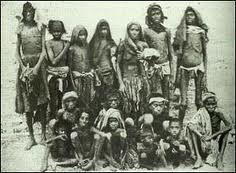 Although the Native American's were available source for labor, there quickly became a demographic transition to African American's due to their able skills of working with livestock, which the Indian's had never seen before, as well as the African slave's familiarity with European style of raising crops. The transition to African based labor provided the promise of cheap labor and mass production. Paralleling this time was the growth of plantation style systems of farming. These combining factors brewed a high demand for an imported source of labor. Between the 1500s and the 1800s, about 10 million Africans were captured and carried to the New World. It is estimated that about 1.5 million died en route. Most of these slaves were bound for Central and South America. Only 400,000 Africans were sent to the British colonies in North America.

Native African's being torn from their family, villages, and home lives and taken to ships toward unknown lands, cultures, and peoples.

Illustration of what one of the ships would look like.

Depiction of living conditions within the boat. You can see how crowded, dark, and unreasonable the living quarters were.
The Middle Passage represented the core devastation and trauma associated with the transition of slavery to the New World. Disease engulfed the ships and thousands died. Starvation and other violence caused hundreds of more deaths. The first and primary source of the slaves on the ships were prisoners of war and victims of piracy and kidnapping. The men, women, and children were stuffed into tight quarters where no sunlight reached. This was the beginning of the African peoples being treated as property by the New World settlers.(1)
How did Africans become an integral part of New World Slavery? Was it cultural, ideological, religious, social, or economic factors? A combination of all components attributed to the large racial role slavery played. White supremacy and other racial ideologies transitioned from European shores, and became more politicized. Judicial law backed up these ideologies that saw black skinned peoples as lesser. In addition, cultural differences between races segregated types of peoples. The white people felt a sense of unity and freedom by pronouncing themselves as Christians of Western Europe. They felt entitled because of their decent lineage. Economically speaking, the plantation slave system proved efficient and highly productive. However, if economic forces were the driving factor for black slavery, white slavery and indentured servitude would have prevailed due to cheaper transportation and self interest.(4)

Depiction of slave auction showing two slaves being sold together up on the pedestal, while white plantation owners bid, or show disinterest. 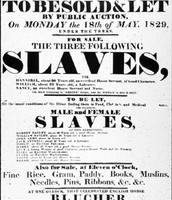 Public signage advertising a slave auction. Signs like this were a regular sighting in town centers.

A mother and child slave being auctioned off. You can see the desperation and sadness from the woman and child's body language.

Historical data does a decent job documenting the great social injustices that the African peoples faced from the start of their lineage in the New World. The term slavery did not exist until the America's gave it meaning. The treatment of the enslaved peoples can be categorized as many things; cruel, inhumane, disgusting. They faced violent forms of personal domination because they were natally alienated and dishonored. The brutal depictions of lynch mobs roaming the woods for run away slaves was a very real reality. These public displays of lynching and other ghastly punishments served to strike fear and submission into slaves and towns people alike. It was a show for planters to identify themselves as powerful. Once branded as lazy, arrogant, and disobedient, they became excommunicated members of society and saw a lack of independent social existence known as social death. It was said that the slaves had no place in the cosmos except as an instrument of his/her master's will. 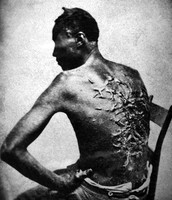 Evident are the scars from a whipping.

Slavery pertaining to certain areas reflected demographic and settlement issues. Slaves were beaten, whipped, and raped, as well as mentally and emotionally abused. Slave owners used them for whatever physical, household, or emotional tool they needed. A slave was seen as a piece of property to be possessed, used, and thrown away whenever it lost it's usefulness.

The African people faced discrimination from a social, political, judicial, and cultural lenses. They were unable to assimilate with the European settlers due to a combination of lethal prejudices and ideologies that characterized behaviors and actions towards them from both non-slave-holding, and slave holding families. The rise in popularity of racism paralleled the rise of Capitalism in the New World. While slavery existed as an economic system for thousands of years before the conquest of America, racism as we understand it today did not exist. This systematized form of oppression was manifested and exploited by the frontier founders. Overall, the slaves that made America their home faced heavy, life changing transitions from their old world traditions. They were torn from anything and everything that was familiar to them. They were dehumanized and treated as lesser people due to racial prejudices that plague our nation to this day. Over time, and with great bravery, changes to the stigma surround slaves altered. Tolerance and empathy were encompassed by whites and blacks alike, who raised up together to harness any power and control they could over the fate of their not just their lives, but the generations to come who would see the same horrors they experienced.(5.)
Slavery in the New World brought about a multitude of reconstructions to the foundations of Old World lifestyles. Slavery saw new class structure, technological advancements, social and cultural changes, as well as vast economic expanses. These changes can be traced efficiently through the transitions, treatment, and tolerance of slaves within the rapid changing New World.

4. Davis, David Brion. Inhuman Bondage: The Rise and Fall of Slavery in the New World. Oxford, England: Oxford UP, 2006. Print.