40% of the people don't believe in GOD but the one that do believe are mostly Jews, Protestants and Muslims. The Russian orthodox church plus unstable government .

People in the Ukraine celebrate the Christmas holiday on January 7. Before that on January 1, they also celebrate New Year's Day. Other holidays that they honor are Women's Day, Easter, Pentecost, Workers' Day, Memorial Day, Constitution Day, and Independence Day.

German dismay: Berlin warns US against sending weapons to Ukraine 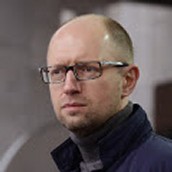 The Cabinet of Ministers of Ukraine is the highest body of state. Their government is a Russian Republic. The Prime Minister is Arseniy Yatsenyuk. He began after the 2014 revolution. He was sworn on February 27, 2014. He is an economist and lawyer. He is the first Prime Minister who has come from Western Ukraine. 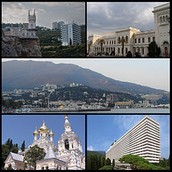 Yalta is a resort city on the north coast of the Black Sea. Some people have a strange fascination with this coastal city and with Odessa in the same area. They think that other people should go see these locations.

Yalta is famous because Franklin D. Roosevelt, Winstorn Churchill and Joseph Stalin secretly met near the end of World War II. They met to talk about and agree on occupation zones after Nazi Germany surrendered. They also wanted to talk about creating the United Nations.

Another outstanding landmark is the Saint Sophia Cathedral in Kiev. This cathedral is one of the best known landmark of the Ukraine. It is well-known because it is so beautiful.

Some Ukrainians like a style of singing called "bilyj holos". This literally means "white voice." Ensemble singing is an authentic folk singing that has 3 and occasionally 4 part harmony. In the 20th century, popular operatic singers like Modest Mencinsky and Solomera Krushelnycki included Ukrainia folk songs in their concert performances. Another traditional type of singing in the Ukraine is choral art singing.

Folk dancing is a tradition in the Ukraine. One type is concert dance and is very popular in their culture. The Ukrainian dances are energetic, fast-paced and entertaining.