The President and Executive Branch

The President and Executive Branch 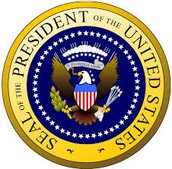 Qualifications and Electing a President

Qualifications are the same and the constitution gives little authority

Becomes president if the President resigns, dies, is removed, or becomes sick

The constitutional requirements for the president and vice president are the same. Why is this so?

After vice president-the speaker of the house, president pro tempore, then the secretary of the state

Do you think voters are given enough say in the choice of vice president?

Answer this question with a paragraph. What did John Adams mean by saying, "I am vice president. In this I am nothing, but I may become everything"?

The Constitution give president power-main job is to execute, and carry out the laws

Should the president have more power than what the Constitution gives him or her? Why?

Discussion
Which role of the President do you think is the least important? why?