The (Close) Discoverer of the Double-Helix

The (Close) Discoverer of the Double-Helix 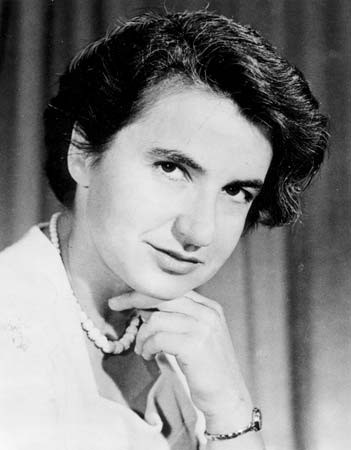 Her Life and Work

Rosalind Elsie Franklin was born in London on July 25th, 1920, and moved to Paris, France, where she worked with her colleague, Maurice Wilkins, on DNA.

She and her colleague consructed x-ray diffraction photos of DNA under varying degrees of humidity. During these experiments, she noticed that the DNA in the pictures were in a helix shape.

Wilkins showed James Watson the DNA photos, though this was without Franklin's consent. The pictures strongly supported Watson and Crick's hypothesis of the double-stranded helical DNA molecule, or more known as the Double-Helix DNA.

"Rosalind Franklin was only two steps away from the solution," said Francis Crick in a Nature article." She needed to realize that the two chains must run in opposite directions and that the bases, in their correct tautomeric forms, were paired together."

Many people, including those who have written science textbooks, have either said Franklin collaborated with Watson and Crick, or never mention the woman in any way. Another reason for why Watson and Crick's stealing of information is so controversial was that Franklin was on the verge of discovering the Double-Helix DNA when she stopped researching DNA in order to study the tobacco mosaic virus.

Though Watson, Crick, and Wilkins published Franklin's works without her permission, Franklin contributed incredibly valuable information on DNA in a relatively short amount of time, for she died at the age of 37 to cancer. Because of Franklin's research, we now understand the structures and components of DNA, and the genetic instructions of life.