Jackie Robinson's mom was named Mallie, his brothers were,Frank,Mack,and Edgar. He also has a sister named Willa Mae. If you are wondering about Jackie's dad well his dad left when Jackie was about 10 months old. The Robinson's ran a farm. Jackie enjoyed playing sports and running track. In his family he was the youngest of all five of them. They lived in Georgia but then they moved to California because it was not safe for black people anymore.

Right before Jackie went to school he had to earn money so he took a job as a paper boy. Then he went to high school and Jr. college. He went to university of California a Los Angeles (UCLA).

Birth when and where?

Where was Jackie Robinson born and when?

Jackie Robinson was born in Cairo Georgia. On January 31st in 1919

He got married to Rachel Isum and had a son named Jackie JR. then Jackie was in the army but, he wanted to play baseball at the time black people could not play baseball but Branch Rickey thought it was wrong so he signed Jackie to the Montreal team but, the white people did not like it at all. Some people did not even want to play with Jackie even his own team mates! Some people wrote letters to Jackie that they would harm Rachel and Jackie JR.. But after a while his team mates liked him a little better. Finally Jackie got signed to the Brooklyn Dodgers! He was known for the first African American to play on a big league team! Later on when Martin Luther King had his i had a dream Jackie marched with him!

-1942 Jackie is drafted into the US Army

-1949 Jackie is named MVP of the National League

-1962 Jackie is voted into the National Baseball Hall of Fame

-The Book Who was Jackie Robinson 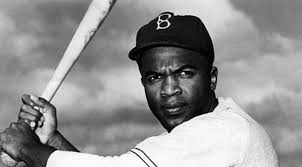