To start with discussing if Beowulf is fact or fiction we need to closley examine the historical context of the story. We have found five interesting facts about the time period Beowulf supposedly lived in. "The story of Beowulf takes place in 6th century in Denmark and Sweden". (Allen,et al. 23) The Anglo-Saxon period was known bloody conflicts and barbarism (Allen, et al. 23). Julius Caesar might have been the first one to write about England (Allen, et al. 23). The Anglo-Saxon began arriving to Britain from northern Europe around 449 A.D. (Allen, et al.23) Anglo-Saxon culture became the basis of English cultures and their vigorous language became the language spoken by the people known as Old English (Allen, et at. 23) 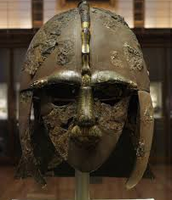 On mound one, the archeologist unearthed the remains of a ninety foot long woodenship of the seventh century outlinedby its iron rivets in the sand ("Archeology"). In the second expedition the archelologist discovered thirty-nine burials, all interpreted as execution from around the eighth and eleventh century ("Archelology"). In 2000 a rescue dig examined the footprints of the planned National Trust Visitor Centre revealing nineteen inhumantions and seventeen early Anglo-Saxon cremations this site became known as Trammer House Cementary ("Archelology"). At least seven of the seventeen of the ring ditches contained urns, of particular interests was a small oval pit containing a high status bronze hanging bowl containing human and animal bone ("Archelology").

In the poem "Beowulf" when Beowulf dies, his people send him off to sea in a ship."We must hurry now to take a last look at the king and launch him, lord and lavisher of rings, on a funeral road" (Allen, et.all. 199). This quote from the story talks about a ship burial of Beowulf. This was very common in the Anglo-Saxon time frame, as we have dicovered from our research, having learned that archielogist have unearthed ship burial from that time frame ("Archelology").

In the poem "Beowulf" there is a heavy influence of Christanity throughout the Novel. "So many man not marked by fate easily escape exile and woe by the grace of God" (Allen, et.all 153). This quote shows the Christanity within the great novel, but in our researched we learned that when this story takes place people were not Christian they were Pagan. The Anglo-Saxons were converted to Christanity by the Romans around 597 which gives us a time frame on when this story was written ( Allen, et.all 23).

During this researched I have learned about The Anglo-Saxons converting to Christianity, Ship Burials, and even the time frame of when the author was thought to live. Its neat how all the things we learned through researched relate to the poem such as the Christian influence, Beowulf being buried in a ship, and how the people can estimate the time frame the author lived becuase of his Christian influence. I think that Beowulf was a real person. Although I do not believe that he killed monsters, as stated in the poem, perhaps he was a very successful leader who liked to make his stories interesting. There is just not enough facts to say forsure if Beowulf was real or not, people will probaly never know. With that being said I conclude this researched paper by stating that in my mind Beowulf will always be real.