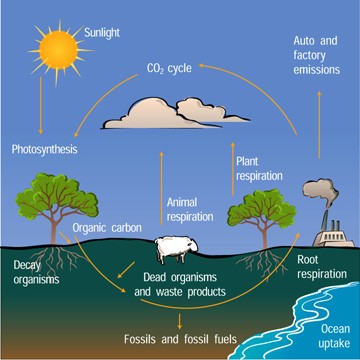 Definition: The series of processes by which carbon compounds are interconverted in the environment, chiefly involving the incorporation of carbon dioxide into living tissue by photosynthesis and its return to the atmosphere through respiration, the decay of dead organisms, and the burning of fossil fuels.

All living things are made of carbon. Carbon is also a part of the ocean, air, and even rocks. Because the Earth is a dynamic place, carbon does not stay still. It is on the move!

In the atmosphere, carbon is attached to some oxygen in a gas called carbon dioxide.

Plants use carbon dioxide and sunlight to make their own food and grow. The carbon becomes part of the plant. Plants that die and are buried may turn into fossil fuels made of carbon like coal and oil over millions of years. When humans burn fossil fuels, most of the carbon quickly enters the atmosphere as carbon dioxide. 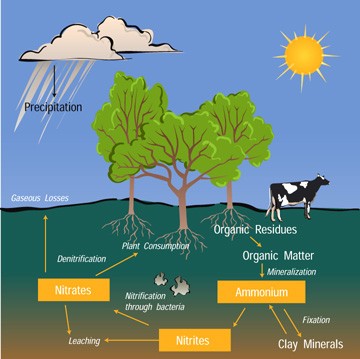 Definition: The series of processes by which nitrogen and its compounds are interconverted in the environment and in living organisms, including nitrogen fixation and decomposition.

Most plants get the nitrogen they need from soil. Many farmers use fertilizers to add nitrogen to the soil to help plants grow larger and faster. Both nitrogen fertilizers and forest fires add huge amounts of nitrogen into the soil and nearby lakes and rivers. Water full of nitrogen causes plants and algae to grow very fast and then die all at once when there are too many for the environment to support. 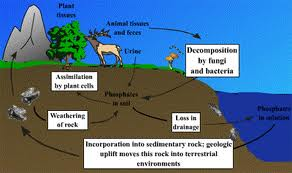 Definition: The phosphorus cycle is the biogeochemical cycle that describes the movement of phosphorus through the lithosphere, hydrosphere, and biosphere.

Phosphorus enters the environment from rocks or deposits laid down on the earth many years ago. The phosphate rock is commercially available form is called apatite. Other deposits may be from fossilized bone or bird droppings called guano. Weathering and erosion of rocks gradually releases phosphorus as phosphate ions which are soluble in water. Land plants need phosphate as a fertilizer or nutrient. When plant materials and waste products decay through bacterial action, the phosphate is released and returned to the environment for reuse.