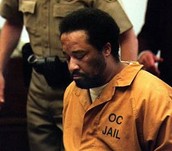 Parker raped a women and murder her unborn baby. Thankfully the women survived but it led her to believe it was her husband who did this to her. It was actually blamed on the father of the baby, Kevin Lee Green. He served more than 16 years of prison until it was further investigated which then charged Parker with First Degree murder. Using the evidence for this crime, it led to investigation of other 5 unsolved crimes also by Parker.