The New England Colonies included: Massachusetts New Hampshire, Maine, Connecticut and Rhode Island. The economy was based on farming, fishing, home manufactures and also sea trading and shipbuilding. Which lead to immigrants and families growing. They were the most literate community in the world, with religion dominating their life. The New England colonies quickly established a tradition of self-government.

The Middle Colonies included New York, New Jersey, and Pennsylvania. England had took control of New York and New Jersey from the Dutch in 1664. Both colonies were governed by a royal governor and a general assembly. The colonies also had relied on grain production, shipping, and fur trading with the Native Americans. Charles II gave American land to William Penn who was a Quaker. Quakers were known for their religious beliefs and refusal to bear arms. 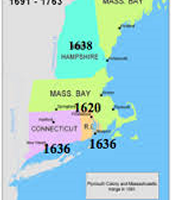 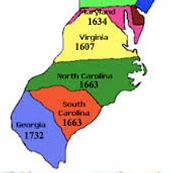 The Southern Colonies included the Chesapeake colonies, Maryland, and the Carolinas. The colonies were more religious and ethnical than the Middle or New England colonies. The families here were smaller than in other regions. There was massive plantations which most of the men made up there worked on. The plantations produced tobacco, rice, and indigo. As tobacco plants increased, so did the number of slaves (mainly black) for labor work increased as well. 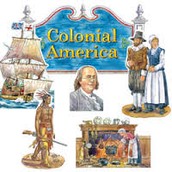 - South had slaves to work for them

- New England had many colonies

- Pennsylvania had the largest population