Get email updates from Tommy:

The reason I think that someone should go see a Christmas Carol by Charles Dickens is it keeps you entertained. First I think that the play is worth seeing is that the actors can change into different roll very effectively. One of the actors had an important roll in the play, but when that character was not needed he put on a ghost costume and played a different roll. Another reason someone should see the play is that the setting on the stage could change very fast. When an actor would come on stage they, for example, would bring a bench on to the stage, but when that prop was not needed that character would run off the stage with the prop. Finally I think that the sound affects were very well done. For example when a ghost would appear on stage the sound people would play a loud booming noise to make the ghost seem scary. In conclusion the play was very well put together and I think it is worth going to see 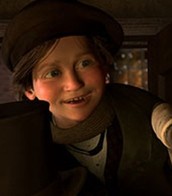 In a Christmas Carol Scrooge has to sacrifice having Bob working on Christmas so that he could spend it with his family. I had to sacrifice Some of my money so that presents could be bought for kids that don't get them