Diego is using Smore newsletters to spread the word online.

Get email updates from Diego: 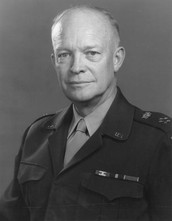 He knows what's good for the people

It's always important as a president to know what's good for the people- and that's one of Eisenhower's many strengths. He doesn't fill his pockets and cracks down on corruption- and that's what America (and any country) really needs!

Eisenhower knows how to deal with other leaders

Years ago, the then-leader of the Soviet Union came to our country while Eisenhower was our president. This was Nikita Khrushchev, and he was an argumentative person that enjoyed provoking his opponents, and when he tried that on Eisenhower, who remained cool and collected throughout the whole ordeal, Khrushchev was taught the steely determination that makes a real leader.

Exploits of a seasoned leader

Plans are nothing, Planning is everything!

This famous quote by Eisenhower shows his cunning and intellect.

With the 101st airborne

Eisenhower, as a general, has seen the hardships of all, and can well represent the people.

Eisenhower before entering a presidential helicopter, speaking to the American people.

Just what the U.S. needs now, or any time!

Will he protect us from troubles abroad?

In the past, Eisenhower has always known what to do when things abroad threaten American interests or lives, and that hasn't changed in the slightest! The people can always put their trust in one of the greatest leaders the U.S. has seen. 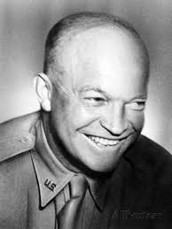 Eisenhower is the choice for a better America, and for a better free world! Born in the small town of Denison, TX on October 14th, 1890. Vote for him at your nearest polling station.

Diego is using Smore newsletters to spread the word online.