Get email updates from Sunny:

How Our World Today was Wiped From History.

How Our World Today was Wiped From History.

On page 32 in Chapter 3 of Brave New World, the Director is telling a story to the young scientists about how in past generations- our present- it was not only abnormal, but immoral to have sexual interacts with anyone before you were in a committed relationship or married. This takes place when the Director and his listeners are exploring the Central London Hatchery and Conditioning Centre, which is where this society creates the children, decides what caste they will be put into, and embed them with lessons for later in life of how they should behave and act. It's true that in our society, we discourage most people who have sexual relations with anyone who they aren't committed or married to, and that just shows how different our society and the society in Brave New World really are. Also, in the context of this quote, at the center they're visiting, they're test tube babies. There are no mothers or fathers, just children and lab assistants. People still have sex with random people all the time in our world today, and it isn't encouraged. There will always be things that at least one person believes to be wrong.

Our world today has many dystopia-like qualities, but as shocking as it might be, we do not live in a dystopia. However, there is one thing that people believe is the worst part of living in the United States. While you might be thinking it’s taxes- which are awful by themselves- I’m actually talking about gas prices. Recently, the prices have been decreasing, but from a recent study, it shows that from 1995 to 2005, gas prices increased more than a dollar per gallon (Gasoline… 1990-2013). Gas prices even reached almost 4 dollars in some places, but now the price has gone down to less than three dollars a gallon, which is still ludicrous but more acceptable than before. As a teenager who has just started both driving and working, I’ve had the undeniable pleasure (much use of sarcasm here, Mrs. Lowe) of knowing how much a tiring ordeal it is to watch the amount of money you have to pay to fill up your car at the gas station. Everyone wishes to spend that money on something else, but sadly most people don’t have that luxury.

While most people blame the government for how high taxes and gas prices are, it isn’t fully their fault. They do have the people’s best intentions at heart, but the other countries we import and export resources from are after one thing, just like we are: money. If we have money, there is more we can do, but we also have to use that money on things we receive from other places, oil included. I’m sure if everyone in the world wasn’t so hungry for wealth and good fortune, there could be a way to let prices return to their ridiculously small state, like when candy was a nickel and you only had to pay fifty cents for a gallon of gas. Sadly, as long as this problem is still in effect, there will always be an issue to address, a person to calm down, and blame for people who are only trying to do what is best not only for our country, but the whole world. 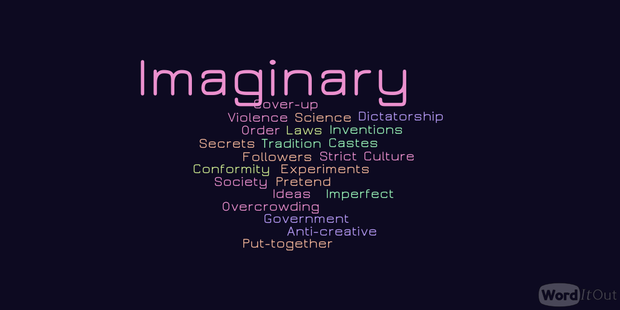 Believe it or not, there actually is a song named Brave New World by a band named Iron Maiden. The song itself is actually named after the novel that was written by Aldous Huxley. At the beginning of the song, one of the first lyrics is, "... mother love is no more, bring the savage back home..." (Brave New World). That pertains directly to the book based on the fact that in the dystopian society that is shown throughout the novel, there are no mothers and fathers. Children are made in test tubes, which is something that is not normally supported in our society today, and are taught sexual tendencies at a very young age. Also, the line about sending the savage back home pertains to the fact that John (the savage) comes from a different society than Bernard and Lenina do. In John's society, there is God, poetry, real danger, freedom, goodness, and sin, whereas in Bernard and Lenina's society, those types of things are unheard of, in fact forbidden. John is tempted by the easiness the foreign society to live and be his own free spirit, not having to worry about anyone torturing him or hurting him with words or actions. However, he doesn't give into temptation. In fact, at the end of the book, John tortures himself every time he thinks about the society he stayed in, particularly Lenina. Sadly, as we all know, it shortly leads to his death where he hangs himself, only to be found by the citizens who followed him like tourists.
Iron Maiden - Brave New World (lyrics) 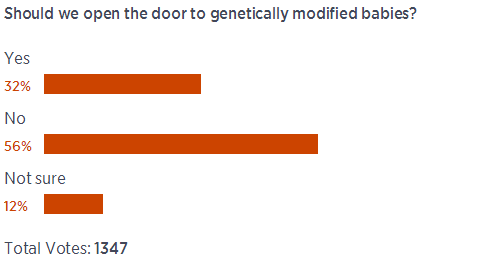 Take Stance: I am Against GMOs/GMPs

I'm not the only one with this stance. There are many different kinds of reasons for why someone might agree or disagree with genetically modified organisms or people. Some may be religious reasons (obviously), or some people might just feel that it's wrong. I happen to side with both argument, and maybe others do as well. As shown by the statistic above, 56 percent (754 people) believe that we should not continue with research and development of GMOs/GMPs (Are We Ready?). There's the argument with religion, like Christianity, that believe that the purpose for human life was for procreation and for giving birth to more and more people. At this point in time, I'm not actually sure if we really need to be making more humans, especially not genetically modified ones. I don't know about anyone else, but I'm not too fond of the idea of someone else having my exact same DNA, thought process, personality traits, and just... well, everything. I already have a twin brother, so that's pretty much torture enough in the most natural form of cloning.

One of the arguments made in the case against genetically modified humans is the uniqueness argument (4 Arguments). We learn every single day of our lives that we are all special and different. No two people are the same. They may have similar interests, looks, personalities, but they are in no way shape or form identical. With cloning, that immediately takes away that trait of humans. Another argument against GMPs is the giftedness argument. When people think about clones, they think about Spy Kids or some other 80s or 90s movies that showcased clones being much smarter and efficient than the actual human from which they were created. We are all gifts and/or gifted, and by making another version of one of us, it takes away that quality. You're no longer a special gift to the world. You can be easily replaced by your identical creation. With the aspect of cloning, if one person gets cloned, then one day everyone will have to be cloned. That takes away a freedom right that we have as citizens and human beings. We shouldn't have to be copied or replaced by a second version of ourselves. If they were to clone every single person as well, they would also be designed to live much longer and be more efficient than our original selves. If they become more efficient, than everything that person could have worked on their entire lives, their talents, prospects, dreams; they are no longer their own. They now also belong to someone else, someone who didn't work to achieve what the original person has. It's somewhat unsettling to me to know that everything I've ever wanted to do or be could possibly be replaced in a simple minute by a clone of myself.

In conclusion, I don't put off any who agrees with GMOs/GMPs, but I myself just don't see the actual person in cloning myself. If I was to die today, I'd rather die being myself and my own person instead of having my clone doing everything for me.