Dallas is using Smore newsletters to spread the word online.

Get email updates from Dallas:

By: Dallas Haley and Corey Patrick

By: Dallas Haley and Corey Patrick

What Where Jim Crow Laws

Jim Crow Laws, where laws that made blacks not as privileged as whites. This was not suppose to happen because of the Emancipation Proclamation, making all black equal to whites. These laws made blacks not able to drink out of the same water fountain, to not being able to go to the same schools as whites.

How did people enforce the Jim Crow Laws?

Many whites that thought that blacks should be treated less than whites, joined the KKK. The people in the KKK killed blacks if they did not follow the laws, they would get killed or badly wounded (if lucky). There was also whites that were not in the KKK that enforced the laws either with the police or with there own ways of discipline.

Most southern states had Jim Crow Laws but many northern states didn't. You can see the difference in peoples opinions, from were they live.

Some products weren't available for some blacks. This happened with vending machines mostly. This made blacks not as equal to whites.

Blacks and Whites weren't aloud to even eat in the same place. They were separated in different eating rooms and even ordered from different lines. The Jim Crow laws were suppose to separate but make them "equal".

Did it affect evacuations?

Yes, Jim Crow Laws had separate evacuation plans for blacks and whites. This was, so they wouldn't be together and have to share the same things because of Jim Crow Laws. City councils said that they didn't have separate plans, but when you opened up the plans you could see in the south that there where defiantly different plans. In the hydrogen bomb in Savannah Georgia there were separate evacuations for blacks and whites (leib, Jonathan, and Thomas Chapman).

Is Racism Laws Still In The United States?

How did Jim Crow Laws end?

There was a march of more than 200,000 Blacks, it happened in Washington D.C. in 1963. This was a dramatic show of how they wanted segregation to stop. There where many court cases leading up to this and building up the anger in the Southern whites, while the blacks were anticipating about the near end of segregation.

2. Blacks were allowed to used the same public phones as whites.

4. The Blacks and Whites were separated in jails.

6. Blacks were separated in restaurants. 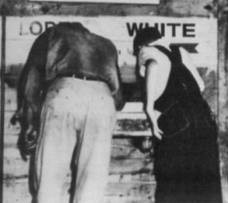 Dallas is using Smore newsletters to spread the word online.

Follow Dallas Haley
Contact Dallas Haley
Embed code is for website/blog and not email. To embed your newsletter in a Mass Notification System, click HERE to see how or reach out to support@smore.com
close