Get email updates from devin:

the civil rights act of 1964 and the equal employment opportunity.

In 1964 congress passed public law 88-352(78 stat. 241). the provisions of this civil rights act forbade discrimination on the basis of sex as well as race in hiring, promoting, or firing. the word "sex" was added at the last moment. according to the west encyclopedia of american law, representative Howard w. smith added the word. his critics argued that smith, a conservative southern opponent of federal civil rights, did so to kill the entire bill. smith however argued that he had amended the bill in keeping with his support of Alice Paul and the national women's party with whom he had been working.

The House Judiciary Committee held a series of hearings on the proposed legislation during the summer of 1963. The proposed bill was amended during the committee process to broaden the scope of protections. The changes strengthened President Kennedy's original proposal in response to the tumultuous summer of 1963,which saw several incidents of racially motivated violence across the South. The House Judiciary Committee approved the legislation on October 26, 1963, and formally reported it to the full House on November 20, 1963, just two days before President Kennedy was assassinated. On November 27, 1963, President Lyndon Johnson asserted his commitment to President Kennedy's legislative agenda, particularly civil rights legislation. 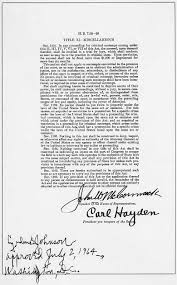 This act, signed into law by President Lyndon Johnson on July 2, 1964, prohibited discrimination in public places, provided for the integration of schools and other public facilities, and made employment discrimination illegal. This document was the most sweeping civil rights legislation since Reconstruction.Passage of the act was not easy. House opposition bottled up the bill in the House Rules Committee. In the Senate, opponents attempted to talk the bill to death in a filibuster. In early 1964, House supporters overcame the Rules Committee obstacle by threatening to send the bill to the floor without committee approval. The Senate filibuster was overcome through the floor leadership of Senator Hubert Humphrey of Minnesota, the considerable support of president Lyndon Johnson and the efforts of Senate Minority Leader Everett Dirksen of Illinois, who convinced Republicans to support the bill. 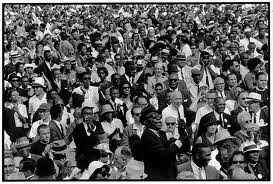 Follow devin w
Contact devin w
Embed code is for website/blog and not email. To embed your newsletter in a Mass Notification System, click HERE to see how or reach out to support@smore.com
close