Rafael Trujillo was the dictator of the Dominican Republic from 1930 until his assassination in 1961.

He was responsible for the deaths of over 50,000 of his own people's deaths, 30,000 from one infamous event, the "Parsley Massacre".

He is considered to be one of the most bloodthirsty dictators ever in the Americas.

Trujillo was the antagonist throughout "In the Time of the Butterflies," doing whatever he wanted, and killing anybody who stood in his way. However, he was made out to look like a god to the people, making it mandatory to have his own picture hung next to the one of Jesus. His regime changed history and made him out to be the savior of the Dominican Republic instead of the cruel dictator, passing out an "altered" version of history books at the Mirabel sister's house. Trujillo's nickname "El Jefe" also symbolizes how he rules the land as the chief or higher power looking down upon the country surrounding the sisters. He had extended his power throughout the country, being everywhere at once. 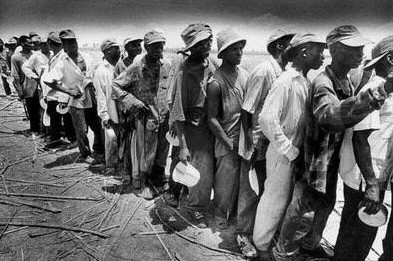 2. "And that's how I got free. I don't mean just going to sleepaway school on a train with a trunkful of new things. I mean in my head after I got to Inmaculada and met Sinita and saw what happened to Lina and realized that I'd just left a small cage to go into a bigger one, the size of our whole country."(Alvarez Chapter 2)

3. “According to Sinita, Trujillo became president in a sneaky way. First he was in the army, and all the people above him suddenly started dying off, till he was the one right below the head of the whole armed forces”(Alvarez 17)

"All of it violated, broken, desecrated, destroyed. Then they set fire to what was left. ... 'I've been good! I've been good!' Patria screamed at the sky"(Alvarez 192).

“Soften his devil’s hear, oh Lord. And then, I said the difficult thing, For he, too, is one of your children.” (Alvarez 216)

1. Why do you think the government painted Trujillo to be as they did?

2. How does the theme of entrapment symbolize the authoritarian regime in the Dominican Republic?

3. What are some of the benefits of giving a government a false identity to its leader?

4. If we lived in a society like the one Dede and her family lived in, do you think most

citizens would be willing to take a stand or conform to the society?

5. Are people like Trujillo a thing of the past?