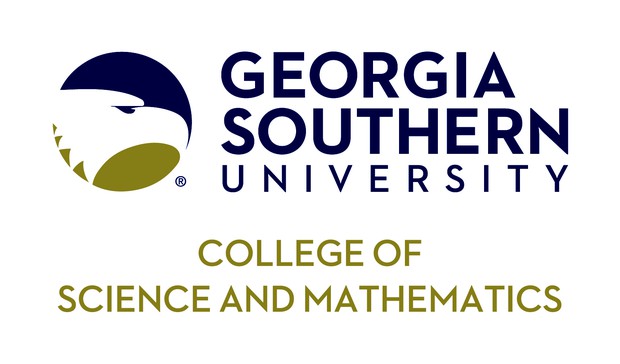 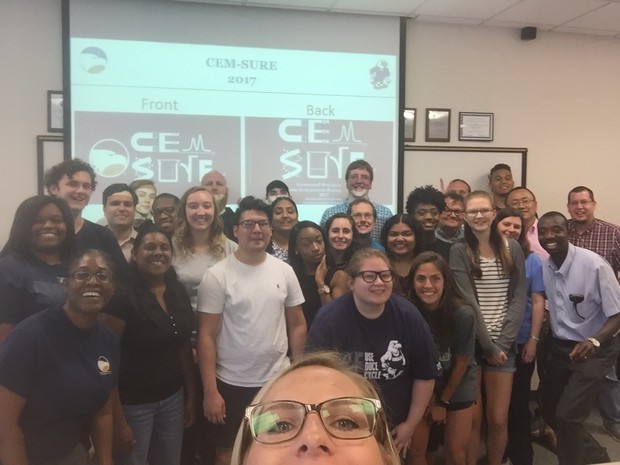 2017 CEMITURE & SURE participants, along with faculty mentors from the Department of Chemistry and Biochemistry

With the end of the spring semester here at Georgia Southern, there is perhaps an assumption that faculty and students take the summer off, but that theory couldn’t be further from the truth. On the first day of Summer Term, a classroom on the third floor of the Nursing and Chemistry building is a hive of activity. Eight students from other institutions across the U.S., along with our own Georgia Southern students and several faculty members from the Department of Chemistry and Biochemistry are chatting and eating. Students are in the hallway having their picture taken and Dr. Karelle Aiken and her team are busy keeping the day’s events on schedule. Today is the CEM-SURE (CEMITURE & SURE) Kickoff.

In 2012, the Department of Chemistry and Biochemistry at Georgia Southern began offering SURE. This research experience was developed for all undergraduates participating in science research over the course of the summer. These summer sessions included workshops on grant writing for undergraduate and graduate fellowships, developing scientific presentations, planning for futures in industry, health and graduate school, as well as research presentations by SURE participants.

After a successful grant proposal, the National Science Foundation (NSF) awarded funding (2015-2017) for the inclusion of an REU program, CEMITURE, which is now incorporated into CEM-SURE. For the past three years, the Georgia Southern University Department of Chemistry and Biochemistry has been inviting students to campus in an effort to broaden and share their scientific knowledge. The CollaborativE Multidisciplinary Investigations Through Undergraduate Research Experiences (CEMITURE) offers 10-weeks of collaborative research, with a $5,000 stipend, along with housing and meal plans.

Karelle Aiken, Ph.D. and Ria Ramoutar, Ph.D., along with ten other coordinators and mentors in chemistry and biochemistry, biology, environmental toxicology and i2STEMe engage participants in intensive research and professional development activities. Participants work directly with faculty mentors on their respective research projects cultivating an environment where they develop necessary skills and gain experiences that solidify their self-identities as scientists. The program is designed so that participants will build a community of scholars with their peers and Georgia Southern faculty; enhance their preparation for future success in graduate programs; endeavor to use their knowledge and expertise in science to make significant contributions to their own communities and the wider society; and gain a global perspective of STEM fields. 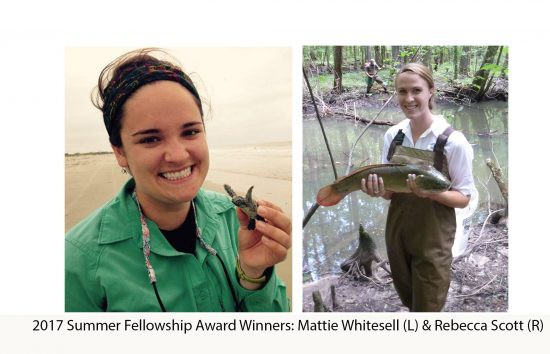 The Institute for Coastal Plain Science (ICPS) is proud to announce that the recipients of the 2017 ICPS Summer Graduate Student Research Assistantships are Rebecca Scott and Mattie Whitesell. These students were selected after careful review of all submissions by a committee of ICPS faculty. Each student will receive a summer research stipend of $4,000 to further their graduate studies.

Rebecca is an M.S. student in the Department of Biology and is investigating the role that environmental factors such as water velocity, channel shape, and water chemistry play in shaping fish communities in Atlantic Coastal Plain streams. Findings from this study will be incorporated into conservation biology applications that are focused on Atlantic Coastal Plain fish populations and their associated habitat.

Mattie, also an M.S. student in the Department of Biology, is studying the factors contributing to hatching success in endangered loggerhead sea turtles that nests annually along the Georgia coast. Using field survey techniques, Mattie will investigate whether nest relocation increases hatch success and will determine which combination of biological and geological factors have the largest influence on hatch success.

The ICPS furthers the College of Science and Mathematics’ mission of transforming scientific knowledge into opportunities for economic development which are protective in our natural resources by 1) promoting, in coordination with public and private partnerships, interdisciplinary research and education directed toward understanding the physical and biological resources occurring below the Fall Line and their sustainable use and management, and 2) enhancing curation of the extensive natural history collections and promoting their use as research and education tools.

For the purposes of this competition, all applicants were asked to show how their research will lead to a better understanding of the physical or biological resources occurring below the Fall Line, and to demonstrate clearly how their project is interdisciplinary. This is the third year for the Summer Graduate Student Research Assistantship competition.

To learn more about the ICPS, visit cosm.GeorgiaSouthern.edu/icps 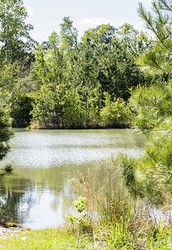 While the University is working on the upcoming consolidation with Armstrong State University located in Savannah and Hinesville, and an enlarged student population of 27,000, the Statesboro-based University has acquired its first permanent scientific field station.

Known as the Effingham Wetlands, the parcel measures about 1,400 acres and was recently donated by the Southeastern Trust for Parks and Land (STPAL) to the Georgia Southern University Foundation with the express purpose of using the property as a vibrant living laboratory.

Georgia Southern President Jaimie L. Hebert, Ph.D., explains, “Because this large tract of undeveloped natural wetland is embedded in one of the most rapidly developing areas in Georgia, just 12 miles northwest of downtown Savannah, we felt compelled to take advantage of the opportunities this property provides for the University. It will become a tremendous resource over time for our student and faculty scientists, especially those in the College of Science and Mathematics.”

According to STPAL’s field studies, the property located in Effingham and Chatham counties, is approximately 841 acres of cutover and regenerating pine; 231 acres of riparian wetlands; 68 acres of hardwoods; 40 acres of mature pine; 15 acres of open grasslands and about 7 acres of small ponds. The major water feature is St. Augustine Creek, a tributary of the Savannah River.

The site will soon become a rich resource for ongoing scientific research where long-term field experiments will monitor the property’s varied ecology. Examples of natural features to be studied include its native plants, surface and sub-surface water flow, soil biota, insects, reptiles, amphibians, mammals, fungi, bird migration and potentially many other learning opportunities. The site is even ideal for studying the region’s tick and mosquito populations.

While the property is largely a wetland habitat, it’s also a marvelous mix of forest and other Coastal Plain habitats lending itself to meaningful research that could yield answers for real-world issues. As Georgia Southern faculty and students collect valuable data in a protected setting, their findings could result in better policy decisions on how natural resources are managed for economic benefits while preserving cleaner water and healthier soils. Georgia Southern scientists will have the ability to take control of the site without fear of theft or disturbance of their scientific equipment.

“This wetland extends and enhances the learning environment beyond the classroom giving faculty, graduate students and undergrads advanced training in the scientific method by doing actual hands-on research in their chosen field of study,” says Martha Abell, Ph.D., dean of the University’s College of Science and Mathematics.

Stephen P. Vives, Ph.D., department chair and professor of biology, says, “Restoring previously logged areas is a growing field with an emphasis on returning habitat to its previous condition and increasing species diversity. Research performed here can be a valuable contribution to the larger body of knowledge on this important subject.”

Kelly Pope, senior director of development for the University’s College of Science and Mathematics, represented Georgia Southern University Foundation throughout the process.

Charles McMillan, coastal director of the Georgia Conservancy and a member of STPAL’s advisory board, commends STPAL and Georgia Southern for taking the lead in crafting such an innovative partnership. “The Georgia Conservancy would like to see similar arrangements between land trusts and universities in Georgia,” adding, “This is certainly a step in the right direction.”

McMillan reminds us that ecology is a relatively young science with most discoveries taking place in the last 50 years. “It’s possible that Georgia Southern student scientists can make significant, new contributions to existing knowledge on how wetlands function.” He explains, just like “the liver and lungs of the body,” wetlands remove toxins and provide oxygen. He believes “the more we know, the better informed we will be to set public policy to manage water resources more effectively.”

About Southeastern Trust for Parks and Land
STPAL has acquired 35 properties in Georgia, Tennessee and North Carolina totaling about 15,000 acres. The Georgia Southern Effingham Wetlands site was donated to STPAL by a generous individual. STPAL then placed deed restrictions on the parcel to ensure it would be conserved perpetually and never developed.

All STPAL properties are protected with various forms of conservation statuses; many are slated to become public parks.

Bill Jones, STPAL’s executive director, remarks, “We are thrilled to be part of this creative partnership which maximizes the benefits of such a large tract. Now Georgia Southern scientists will elevate its value as conservation land to an even higher level by conducting meaningful scientific research here with long-term implications.”

Over time, Georgia Southern scientists plan to restore the property to natural habitat types and divide it into management zones with restoration targets.

Eventually, the property will also be shared with local K-12 students as an educational resource, and guided field trips will be encouraged for targeted groups like the Ogeechee Audubon Society whose members can assist with annual bird counts.

According to an advisory board with extensive land management experience who analyzed the site on behalf of Georgia Southern, their report concluded, “This property is large and diverse and would have value for field trips in at least 10 upper level courses.

The Effingham Wetlands property will strengthen the potential for meaningful field-based research experiments by students and faculty. “

Georgia Southern University, Southern Drive, Statesboro, GA, United States cosm@GeorgiaSouthern.edu (912) 478-5111 cosm.GeorgiaSouthern.edu
Embed code is for website/blog and not email. To embed your newsletter in a Mass Notification System, click HERE to see how or reach out to support@smore.com
close