Charles Bukowski was an underground poet who relied on his own raw emotional and physical experiences for inspiration to write. Born in Andernach, Germany on August 16, 1920 to a German mother and an American soldier, at the age of three Bukowski's family moved to Los Angeles. After attending the Los Angeles City College, he moved to New York to become a writer. At age twenty six, a lack of publishing caused a downward spiral in Bukowski's life and he actually quit writing to go on a ten year drinking binge. After these lonely ten years a bleeding ulcer had developed in his alcohol-ridden body which provoked him to start writing again. Although he did have to maintain a variety of jobs to support himself while writing he still made time for drinking. His professional writing career was started at age thirty five beginning with small magazines, but ending up with more than forty books of poetry. Illness plagued Charles again toward the end; this time leukemia. He died in 1994. 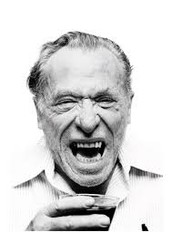 A Smile To Remember

This poem is an eerie paradox. The mother is so hopeful for her family to be "normal" and happy again. She is beaten everyday, along with her son, but continues to put on a brave face. It seems as if Bukowski tries to justify his fathers beatings by saying his father has his own demons he is trying to conquer and hurting his family somehow helps. In the second and third lines Bukowski talks about heavy drapes covering the picture window; I think this is a metaphor for nobody being able to look in and see the abuse not only in their house but on their faces. This is terribly sad because of the abuse that is going on. They are to afraid to tell anyone and have come to accept their lives as they are. In the last lines of this poem when the fish are dead floating around in their bowl and then are fed to the cat, this is a perfect example of imagery. I think Bukowski really wants you to see the pain they were caused everyday not just physically, but emotionally too. This poem, which at first glance may seem about goldfish, is so dark. This man lived a hard life from the beginning. A Smile To Remember Poem by Charles Bukowski - Poem Hunter

www.poemhunter.com
A Smile To Remember by Charles Bukowski. .we had goldfish and they circled around and around in the bowl on the table near the heavy drapes covering the picture window and my mother always . Page 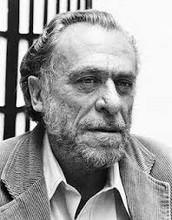 This poem seems to be a pre-suicide note. Bukowski speaks of his wife finding him dead one morning and trying to revive him. This saddens him to know that his wife will be left with nothing, but he is now also able to tell her he loves her. A simile he uses is in the first lines of his poem, saying "death is like a cat that will jump on the bed" may be the first sign of him wanting to end his life. He is telling how significantly fast death can come, and how much faster it may come if you wish it to. The whole mood of this poem is like a roller coaster, going from his own death, to him mourning his wife while he is dead, to finally coming to terms with loving his wife. The impact this poem has could be taken several different ways, from the hate he has for himself, to the love he has for his wife.

www.poemhunter.com
Confession by Charles Bukowski. .waiting for death like a cat that will jump on the bed I am so very sorry for my wife she will see this stiff white body shake it once then maybe . Page

For Jane: With All The Love I Had, Which Was Not Enough

Of all the poems I have looked through of Charles Bukowski's, this one was the hardest to read. His daughter, I assume, lay there limp and withered from death. He sees her as the little girl she was, innocent, sparkling, and full of life. He collects all of her possessions and studies them to remember her. As he is praying to every god he can think of, he realizes nothing will bring her back. Nothing can put life back into her. The mood of this poem if very angry. He is confused at this loss and it reminds him that he is only human. This life will bring pain and he hates that. He says he "called god a liar" he was sure that "nothing that knew his name would die". In the end no matter who you are, it all ends in death. This whole poem has a hint of irony behind it all. He himself has done more harm than good in his life. He has chosen an ungodly road, but this little girl that has done no wrong, is dead. Compared with the above poem "Confession", the theme of "For Jane: With All The Love I Has, Which Was Not Enough" is much more heavy-hearted. For Jane: With All The Love I Had, Which Was Not Enough: Poem by Charles Bukowski - Poem Hunter

Pull A String, A Puppet Moves

This poem, compared with the last three, has a lighter feel to it. Instead of mourning something, or being sad he is just basically saying don't take things for granted. Everything we have can be lost. Towards the end he explains that everything that happens can root back to you. The things that happen to you in this life may not be "your fault" exactly, but if you are in a bad place in your life it can sure seem like it. His tone at the beginning is much different than at the end. At the beginning he just seems like he is so thankful for what he has in his life and that even though you can loose it all he hasn't quite yet. Towards the end he remembers the bad he has done in his life and becomes much more solemn. The setting at the end of this poem is in his kitchen, where he is drunk and has just knocked down all the china. Where as before he was making references to big, significant places that could make such a large impact on your life, but when it comes down to it the little things matter just as much sometimes. Small occurrences can sometimes completely alter your whole life, which is something we need to remember. www.poemhunter.com
Pull A String, A Puppet Moves by Charles Bukowski. .each man must realize that it can all disappear very quickly the cat the woman the job the front tire the bed the walls the room all our necessities . Page

Follow Lesley Adamson
Contact Lesley Adamson
Embed code is for website/blog and not email. To embed your newsletter in a Mass Notification System, click HERE to see how or reach out to support@smore.com