College enrollment up in first year of Say Yes

The percentage of CMSD graduates enrolling in college is up for the first time in five years.

According to the National Student Clearinghouse Research Center, 44 percent of the District’s 2019 graduates enrolled in college for the fall. That was up 4 points from the previous year, and the figure could rise if additional students enroll for spring.

The rate declined from 49 percent in 2014 to 40 percent in 2016 and had stayed flat until now, even as CMSD’s graduation rate, currently at 78.2 percent, continued to set new record highs for the District. Many attributed the trend to the rising cost of higher education.

Say Yes Cleveland provided $635,000 for scholarships to the Class of 2019 for the fall semester. 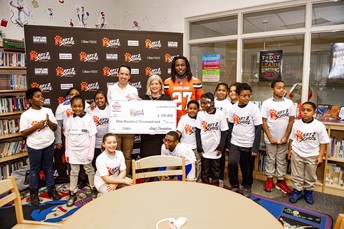 A $100,000 grant from the Arby’s Foundation will help four CMSD schools identify barriers to attendance and work with families to find solutions.

The grant was announced Dec. 10 during a visit that Cleveland Browns running back Kareem Hunt and team mascot Chomps paid to Mound School in the Slavic Village neighborhood. Arby’s works with the Cleveland Browns, the lead partner in CMSD’s “Get 2 School, You Can Make It!” attendance campaign.

Mound is one of four elementary schools that the American Institutes for Research will train and coach in addressing barriers to attendance.

Mound averages 89 percent attendance but is striving to reach the state standard of 93 percent. 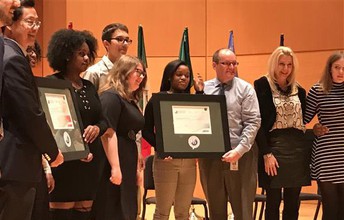 “This was our focus since we stepped on the campus in 2017,” said Principal Ameer Kim El-Mallwany, referring to the design of courses that would meet IB standards. “The kids felt the brunt of it. They felt the pressure, the rigor the teachers were feeling.”

CMSD becomes one of three school districts in Ohio to offer International Baccalaureate programming from kindergarten through 12th grade. The other two are Shaker Heights and Oberlin. 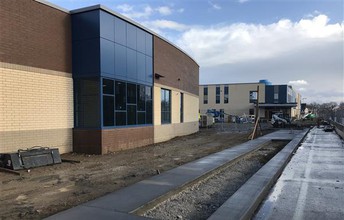 As the physical structure of a new West Side high school campus takes shape, so does the academic programming.

The campus is under construction at 4600 Detroit Ave. and will be ready for the 2020-21 school year. It will house two high schools -- Garrett Morgan will move there and be joined by a new model.

On Dec. 5, CMSD gave a status report on planning for the new model’s academic program and strengthening of the science and engineering focus at Garrett Morgan. The District also provided information on how the schools will emphasize the arts and work together.

District and community representatives spent three months identifying the schools’ guiding principles and the traits and characteristics of their ideal graduates. They also outlined ways the schools can collaborate with each other and work with community partners. 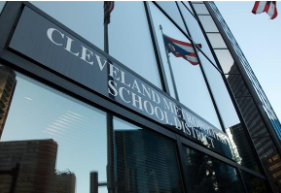