Gregory Lee Johnson was taking part in a demonstration in Dallas Texas and was protesting against nuclear weapons and many more. Many people participated in it. Johnson carried an American flag and when he reached the city hall, he put kerosene on the flag and lit it on fire. Some people said they were upset about what had happened, but thankfully no one was hurt. After the riot, Johnson was arrested and fined $2,000. The police charged him with violating a Texas law that said people couldn't vandalize a respected object. 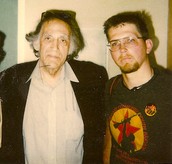 Johnson and his lawyer

Burning of the Flag

This is the U.S.A flag that was burned by Johnson in 1989 at a demonstration.

Johnson appealed his case to the Texas Court of Criminal Appeals and they agreed with him. They said he was protected by the First Amendment that said freedom of speech included symbolic speech. The considered the burning of the flag was "symbolic speech" so Johnson was not to be punished. But, the state didn't agree with them and wanted to preserve the flag as a symbol of national unity. They thought that their interests were more important than Johnson's speech rights. They called up the Supreme Court and asked them for the decision. They passed the law that people cannot burn the flag.