Who is really was this "Candy man"

Who is really was this "Candy man"

How did he start his career?

Born on December 8, 1925, in New York City, Sammy Davis Jr. overcame prevailing racism to establish himself as an entertainment legend, becoming a successful comedian, actor, dancer and singer. As part of the Rat Pack, with Frank Sinatra and Dean Martin, Davis was known for films like Ocean's 11and Sergeants 3 along with his partying ways. As his fame grew, his refusal to appear in any clubs that practiced racial segregation led to the integration of several venues in Miami Beach and Las Vegas. A Tony-nominated performer, Davis was also associated with popular recordings like "I've Gotta Be Me" and the No.1 hit "The Candy Man." 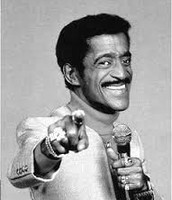 What kind of fool am i?

This man sure is loved!

How did he end his Career?

Sammy Davis Jr lived until he was 64 years old, Sadly he dies of Laryngeal Cancer, He died in 1990. Many many people we very sad to see him go. The last song Sammy Davis Jr ever put out was called birth of the blues, He put that song out in 1971. That was the last song he ever made. Sammy Davis Jr was a well known and missed artist.