Get email updates from Chandler:

When and How sports in Ancent Greece started ?

776BC which was the year of the 1st Olympic games. The games were held every 4 years in Olympia, in honor of the god Zeus. Some of the sports included wrestling, jumping, javelin and chariot racing. A crown of olive branches was awarded to the winner.

Who was allowed to play/participate in sports?

Who was allowed to watch the games/sport ?

What sports did they play?

They played many sports. These sports include discus throwing,boxing,jumping,wrestling,pankration,and equestrian events. Pankration is a form of martial arts which is a mixture of boxing and wrestling, and is said to be one of the toughest sports. Equestrian Events is the sport of horse and chariot races.

Here are some of the sports they played: 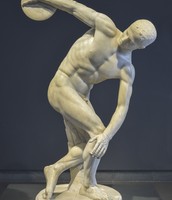 How the Greeks felt about sports

The athletes were an important part of greek culture to be an athlete in Greece you had to train about 8 hours a day.