by Amy Reed and Akshita Bhatia

by Amy Reed and Akshita Bhatia 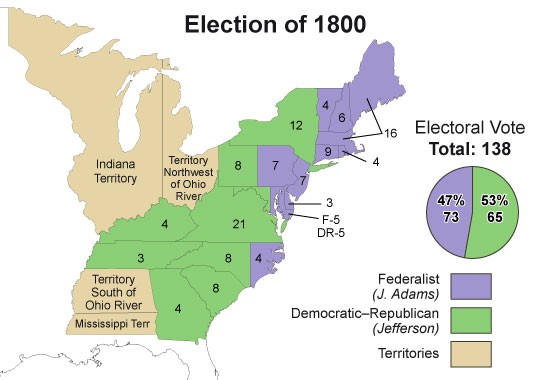 John Adam's first term as President was marked by crushing missteps, such as the Alien and Sedition Acts, that made him a very unpopular President. When Adams ran for a second term in the election of 1800, he was meet by Thomas Jefferson. A heated battle ensued between John Adams, the leader of the Federalist Party, and Thomas Jefferson, the leader of the Democratic-Republican party. The election was filled with name calling on both sides. On one side the Federalists accused Jefferson on being non-Christian and fathering children with one of his slaves. On the other side, the Democratic-Republicans protested the encroachment on individual rights of the Alien and Sedition Acts, the increase in taxes, and the expansion of the US navy under Adams's presidency. The election resulted in a momentous victory for the Democratic-Republican party. This marked the first peaceful transfer of power within a government. Further more the Federalist party never fully recovered from the election of 1800, and slowly declined in power after it.

The Significance of The Election of 1800

The election of 1800 was a turning point in American history. This election marked the first time that two political groups functioned as separate national parties in the race for presidency. Each party openly attacked the other party's candidate in mudslinging campaigns similar to those seen today. In this election we also see a polarization of public opinion, foreshadowing the upcoming civil war. As a two party system emerges, the United States loses a level of overall unity as factions within the government battle for power. The Federalist loss in the election of 1800 lead to the party's decline in power, and ultimate demise.