Brigid is using Smore newsletters to spread the word online.

Get email updates from Brigid:

Located by the Willson River, on the out-skirts of the thriving city of Limsore, St John's College Woodlawn is a school with values of catholic faith and living to your full potential. A school full of opportunities and support; of learning and of belonging. A school where you have the power to be yourself. Does this sound like the school for you (or your child)? If so, read on.

The school you see today was founded in 1931, and owes that to the visions of Bishop John Carroll, who would later have a house named after him; the kindness of Magaret Buckley, who donated the land; and the commitment of the Marist Fathers, who made the move from New Zeland to get the school started, at the invitation of Bishop Carroll.

At first, it was an agricultural college, a boarding and day school for boys only, however it is no longer a boarding school and in 1996, it became a co-ed school. 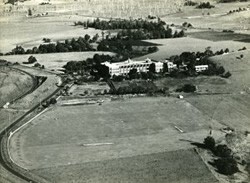 The word Marist comes from the name Mary, who is the mother of christ.

Marist charism is a sense of family, simplicity, presence and love of work.

The community that is St John's embraces these characteristics by giving support when it is needed; genuinely caring for each individual student; encouraging students to perform to the highest of their abilities; and sharing in Mary's work of bringing the life of Christ to it's students, and allowing it to grow and flourish in them.

The Symbols, Motto and Crest of Woodlawn

The college crest is an important symbol to the school, as speaks of Woodlawn's past and strength. The monogram, "A.M." represents the words, "Ave Maria", which is latin, and translates to "Hail Mary". The star, which is a symbol of Mary too, embodies our hope and comfort through life. Together, they show that we are a Marist school.

The eagle is a symbol of St John the evangelist.

The motto, "Tenete Traditiones", is taken from St Paul's second letter to the Thessalonians, which reads: "God called you to this through the Good News we preached to you; He called you to posses your share of the glory of our Lord Jesus Christ. So then, our brothers, stand firm and hold fast to the traditions which we taught you, both in our preaching and our writing". (2 Thess. 2:14-15). 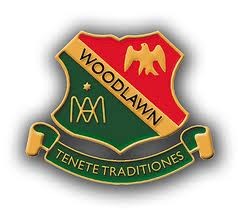 The Colours and Houses of Woodlawn

Woodlawn has three main colours, with Kennedy's blue, only being a house colour.

Green- symbolises hope for eternal life. Green is the colour of Carroll House.

Carroll House- is named after Bishop Carroll, founder of the college. It was his decision to establish a college at Woodlawn.

Red- symbolises love for Christ. Red is the colour of Segrief House.

Gold- symbolises loyalty to christ, the king. Gold is the colour of Bell House.

Some of our very important events include; The opening mass, which is a very spiritual event that marks the beginning of the new school year; The not-to-be-missed swimming carnival, in which the four houses battle it out for the title of "Swimming Carnival Champions"; The exciting cross country, which stretches up to 5km into the nearby hills; And St John's Youth Day, when year 12 takes over the school.

Events that have taken place in the past include formals, opening masses, swimming carnivals and other sporting events. As you can see, many of these events we continue to honour today.

What We Have to Offer

You also have the opportunity to represent the school in sports such as soccer, basketball, football, netball and cricket.

Through Woodlawn, students are able to participate in TOM, a problem solving programme teams of students from years 5-10; Duke of Edinburgh, a non-competitive program of self-development for 14-25 year olds; Our media and journalism unit, called SNAZZI; Even chess, and while at Woodlawn, many more opportunities open up.

A night to view our school and it's facilities.

For more on the schools enrolment procedure, click here.

Brigid is using Smore newsletters to spread the word online.