As General of the Continental Army

As General of the Continental Army 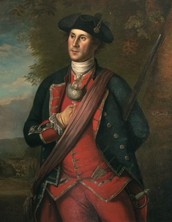 Ever since George was a boy, he was in a military-like atmosphere. Washington grew up handling guns and learning to fence. Before he became leader of the Continental Army, Washington had some experience as a soldier in the English Army during the French and Indian War. This taught him the weaknesses of the British Army and helped him through the tough winters of the Revolutionary War.

On June 14, 1775, George Washington was appointed the General of the Continental Army by Congress. Even though he had previous Military experience, Washington had never led a large force. His first victory came in 1775 when him and his men drove General Howe's army from Boston. This victory was very important for Washington and his troops because Howe had left behind supplies that the Continental Army desperately needed.

Another pivotal victory for Washington was the battle of Trenton on December 26, 1776. The night before, him and 2,400 of his troops crossed the Delaware River. Then at 8 am the next morning, The Americans attacked the Hessian outpost. The Continental Army caught the Hessian troops by surprise which resulted in 20 killed, 80 injured, and 900-1,000 captured by Washington and his troops. This was such a success because it boosted the morale of Washington's Army and inspired more rebels to join arms with the Continentals.

One of the last battles in the Revolutionary war was the most important for Washington and America's independence. This was the battle of Yorktown in October, 1781. Washington and his troops along with the aid of the French surrounded General Cornwallis and his men. The British put up a fight but eventually surrendered on October 19. The battle ended with the British Army losing 300 troops, 600 wounded, and 7000 were captured. The battle of Yorktown was important because it led to negotiations between Great Britain and America. Then in 1783, the Treaty of Paris was created which brought peace and freedom for America.

One of Washington's greatest spectacles of leadership came when he wasn't on the battlefield. Early in 1783, George prevented a military uprising by his troops. His men were angry because Congress wasn't paying them what they were promised. Washington addressed them and while he was reading a letter, he struggled to see the words due to his poor vision. He pulled out his glasses and said to his men, "Gentlemen, you must pardon me, for I have not only grown gray but almost blind in service to my country." This quote really moved Washington's men, it even brought some into tears. Without Washington's speech, the revolution could have ended much differently.