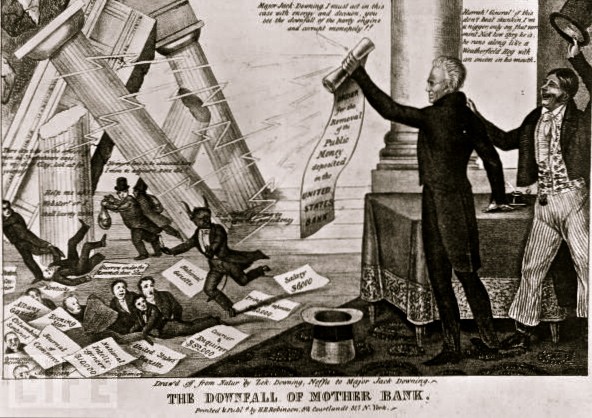 President Jackson opposed the Second Bank of the United States (the national bank) as he felt that the bank benefitted the elite, violated the constitution on multiple levels. In Jackson’s eyes, the national bank went directly against the constitutional basis of state sovereignty and the principle that “all men are created equal.” Although Congress voted to reauthorize the Bank in 1832, Jackson vetoed the legislation. With his victory over Henry Clay, who had allied with the Bank and Nicholas Biddle, president of the Bank in the presidential campaign of 1832, Jackson believed that he had public support to take down the national bank. Jackson’s administration decided to remove all federal deposits from the Bank which came to about 20% of all deposits. When Congress did not approve of the action, Jackson tried to circumvent congress and act on executive power alone. The Us Secretary of the Treasury, William Duane, was authorized to make decisions about the deposits and did not believe that governmental deposits should be removed. When Duane requested that Congress be involved, Jackson refused. Jackson went on to fire Secretary William Duane and appointed one of his closest advisers Roger Taney who immediately transferred funds to several favored privately held banks,effectively destroying the national bank.

By vetoing the bill to recharter the Second Bank, President Jackson bypassed the will of the Congress in addition to a decision by the Supreme Court. His use of Executive action resulted in the nickname “King Andrew” for excessive use of power. Furthermore Jackson’s flagrant use of power turned many politicians against him. When Jackson had Secretary of the Treasury Taney remove all federal funds, the country was thrown into fiscal instability that led to a drop into economy that affected the Van Buren administration. That in turn contributed to Van Buren’s unpopularity, and why he lost the election for a second term. However, Jackson’s belief that a strong national bank held in private hands was a danger to the country eventually resulted in an Independent Treasury.