Pochahontas was the daughter of the Powhatan the leader of a large confederacy. She was key in communication and positive relations between the Jamestown settlers and the Powhatan Confederacy.

Often misinterpreted as saving his life, Pochahontas was key in the ritual adoption of John Smith. 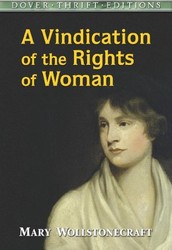 Early in the Colonies and the Early Republic

Anne Hutchinson was an Antinomian leader in the early Massachusetts Bay colony. She clashed with Puritan leaders on theology and eventually pressed her views in conflict with male leaders and in open public court. She and Roger Williams are eventually expelled from Massachusetts Bay.

Phillis Wheately (Poems on Various Subjects Religious and Moral ) was the first published African-American poet. She wrote some about gaining freedom. She was freed after her master's death.

""Twas mercy brought me from my Pagan land,

Taught my benighted soul to understand
That there's a God, that there's a Saviour too:
Once I redemption neither sought nor knew.
Some view our sable race with scornful eye,
"Their colour is a diabolic die."
Remember, Christians, Negros, black as Cain,
May be refin'd and join th'angelic train."

In her letters to her husband, Abigail Adams asked John to "Remember the Ladies". "...I desire you would Remember the Ladies, and be more generous and favourable to them than your ancestors. Do not put such unlimited power into the hands of the Husbands. Remember all Men would be tyrants if they could."

Molly Pitcher was a mythical figure, an amalgam, representing women who courageously and anonymously fought during the Revolutionary War, affecting the acceptable role of women in colonial life.

Judith Sargent Murray ( On the Equality of the Sexes)pushed for the recognition of the intellectual equality of men and women as well as the need for economic independence for women.

"The idea of the incapability of women, is, we conceive, in this enlightened age, totally inadmissible; and we have concluded, that establishing the expediency of admitting them to share the blessings of equality, will remove every obstacle to their

Olympe de Gouges (Declaration of the Rights of Woman and the Female Citizen)called for citizenship for women focusing on their key role in the revolution and an equaling of their ability in speech and other rights.

"Male and female citizens, being equal in the eyes of the law, must be equally admitted to all honors, positions, and public

employment according to their capacity and without other

distinctions besides those of their virtues and talents."

Mary Wolstonecraft (A Vindication of the Rights of Woman) stated that women appeared inferior because of their lack of education and demanded an equaling of educational opportunities. She is also pushed for a more equal social order.

“My own sex, I hope, will excuse me, if I treat them like rational creatures, instead of

flattering their fascinating graces, and viewing them as if they were in a state of perpetual

“I do not wish them [women] to have power over men; but over themselves.”

Sacagawea was a native Shoshone who was indispensible tot eh success of the Lewis and Clark expedition. Sacagawea both translated and fostered cooperation between the expedition and the many native peoples that it encountered.

Women Led Many Key Reform Movements in the Antebellum Era

Elizabeth Cady Stanton (Seneca Falls convention - 1848) was key in writing the Declaration of Sentiments in 1848. In addition to suffrage Stanton pushed for property rights, custody rights, equitable incomes, and access to birth control.

Lucretia Mott (Seneca Falls convention - 1848) was a Quaker leader and abolitionist, aiding in the founding of several antislavery societies in the United States. Mott was also a key participant qt the Seneca Falls Conference.

Harriet Tubman (picture above) was an escaped slave and lead conductor in the Underground Railroad, credited with at least 13 missions and the freeing of 70 slaves.

Harriet Beecher Stowe was most prominent for the writing of Uncle Tom's Cabin which educated hundreds of thousands of northerners on the evil nature of slavery. Uncle Tom's Cabin was both published as a book and performed as a play.

Dorothea Dix was key at both the state and federal level for laws reforming the treatment of the indigent insane.

“I come to present the strong claims of suffering

humanity. I come to place before the Legislature of

Massachusetts the condition of the miserable, the

desolate, the outcast. I come as the advocate of

sunk to a condition from which the unconcerned

world would start with real horror.”

She also served as superintendent of nurses during the Civil War.

Sojourner Truth - in a Field of Her Own 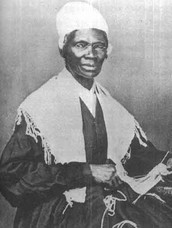 Truth traveled and spoke widely across the north on both abolition and women's rights. Her 1851 speech, "Ain't I a woman" is widely considered to be key proclamation in the women's rights movement.

There is modern disagreement of what the accurate dialect is in which Truth spoke.