Muhammad Ali was born on January 17 1942, He was born in Louisville Kentucky. He also lived with his parents and brother. According to http://school.eb.com/levels/elementary/article/352734, His birth name is Cassius Marcellus Clay junior. Another interesting fact about his early life is that he grew up during a time with Jim Crow laws. Jim Crow laws prevented whites and blacks from doing things together.

Muhammad Ali began boxing in 1954, at the age of 18 he won a gold medal. In 1964 he defeated world heavyweight champion sonny Liston. According to http://school.eb.com/levels/elementary/article/352734, Muhammad Ali joined the nation of Islam 1964. In 1967 he refused to join the armed forces. So he got arrested but in 1971 he was found not guilty. He helped children in need.

Muhammad Ali refused to join the armed forces because of religious reasons, because of this they did not let him fight for 3 years. According to https://www.pebblego.com/content/biographies/article.html?a=3053&previous=3047, Muhammad Ali announced that he has a disease similar to Parkinson’s disease. He retired from boxing in 1981 when he lost to Trevor Berbick. He worked for charities after he retired. Married four wives and has nine children.

He Muhammad Ali was a popular sports hero, all the money won gave to charities. His favorite catchphrase was “float like a butterfly, sting like a bee.” According to http://www.ducksters.com/biography/athletes/muhammad_ali.php, he was “voted number one heavyweight in the 20th century.” He was known for the world heavyweight champion, and his nickname was the greatest he had some nicknames. 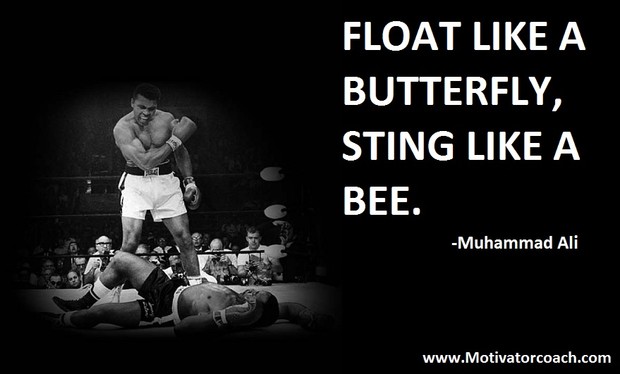 Connect with A ALI