By your local news editor, Hugo

By your local news editor, Hugo

The earthquake struck Sydney on May 4th 1984 on the Indo-Australia Fault line, the earthquake lasted three minutes.

Before this terrible disaster...

It was eleven fifty eight ante meridian, there had already been sixteen foreshocks before hand.

No one was injured by the foreshocks but everyone started running around screaming like crazy and boy it was hurting my ears. 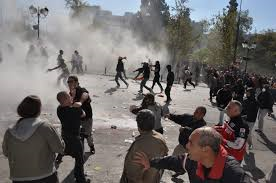 During the disaster this happened...

Lunch had just started, it was twelve forty three post meridian when the earthquake started, the floors and walls started rumbling and crumbling, roads crumbled downwards. It was horrible 2.7 million buildings were destroyed and five million people died in this horrific earthquake four hundred dying by the fire that the earthquake caused. Streets fell, buildings shook and all I could do was hide under a desk and wait for it to be over while watching our buildings fall and turn to dust.

After the frightening earthquake

After the earthquake struck there were 17 aftershocks in the next five minutes, the aftershocks weren't strong enough to harm people. The damage was severe and will take about twenty years to repair the damage.

The news station has interviewed two person that survived the devastating earthquake his name was William and Dave here's what they said (William): "It was terrifying, everyone ducked under their desks because we recently learned about earthquakes and we immediately new what to do but even though we knew what to do we were all still screaming."

"Everything collapsed walls shook and floors rumbled it was the most life threatening event that has ever taken place in my life! I am glad that I did not get injured but I am most unhappy about my family getting injured during the earthquake."

To Conclude this News Letter

To conclude this news letter this giant earthquake injures many and makes many unhappy.