A condensed version of 4-H Project Green Teacher will be offered via Zoom weekdays from June 8th to 16th. The sessions will be held for one hour each at 11:00 a.m. daily, and then again at 1:00 p.m. daily. There will be a one hour break in between. Since no concrete materials will be given, the series is free for one time only. Details follow in the brochure below. Register online at: https://osu.az1.qualtrics.com/jfe/form/SV_3K3eue4IkcDtLJX

You can also find the brochure here: https://franklin.osu.edu/sites/franklin/files/imce/Program_Pages/4H/PGT%20Spring%202020%20Corrected%20Brochure.pdf 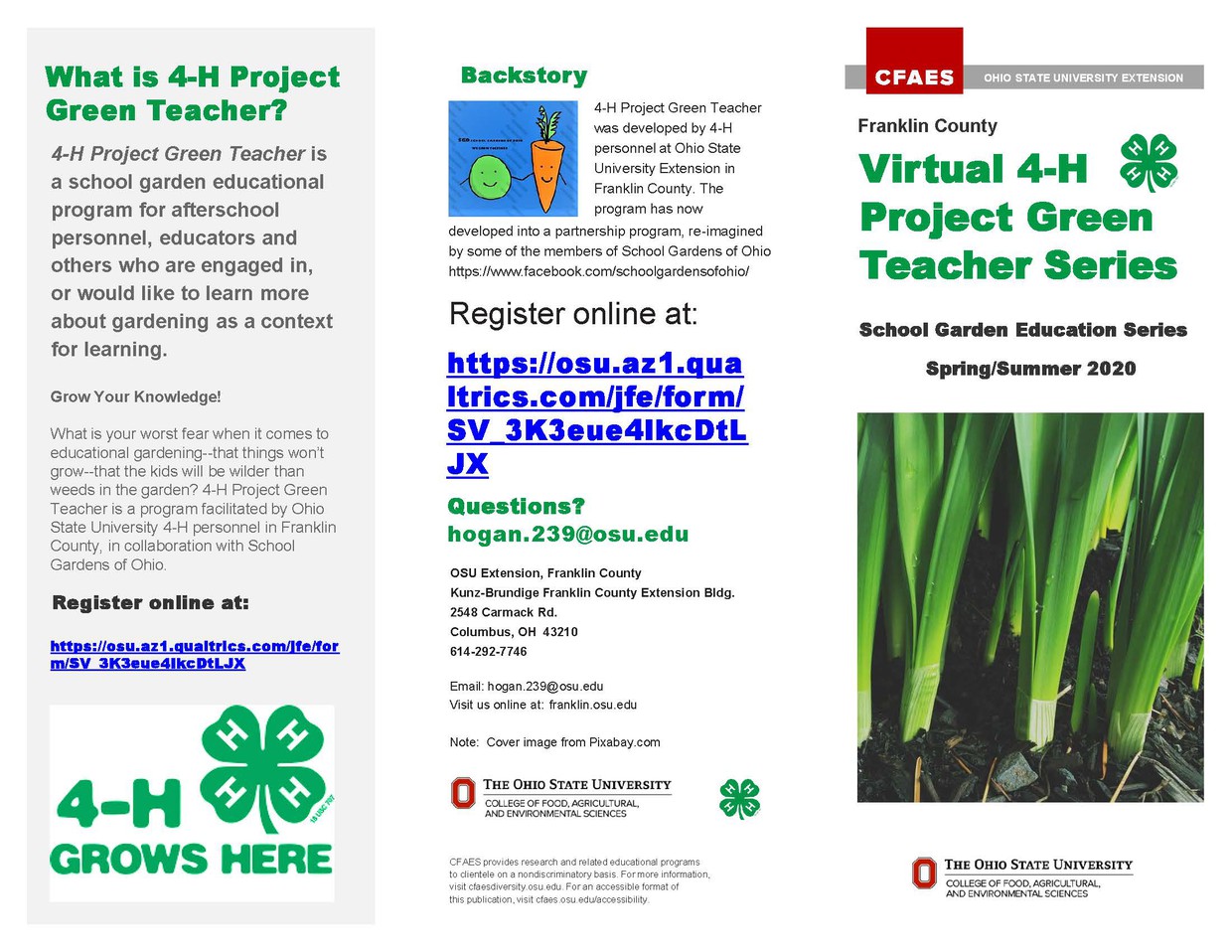 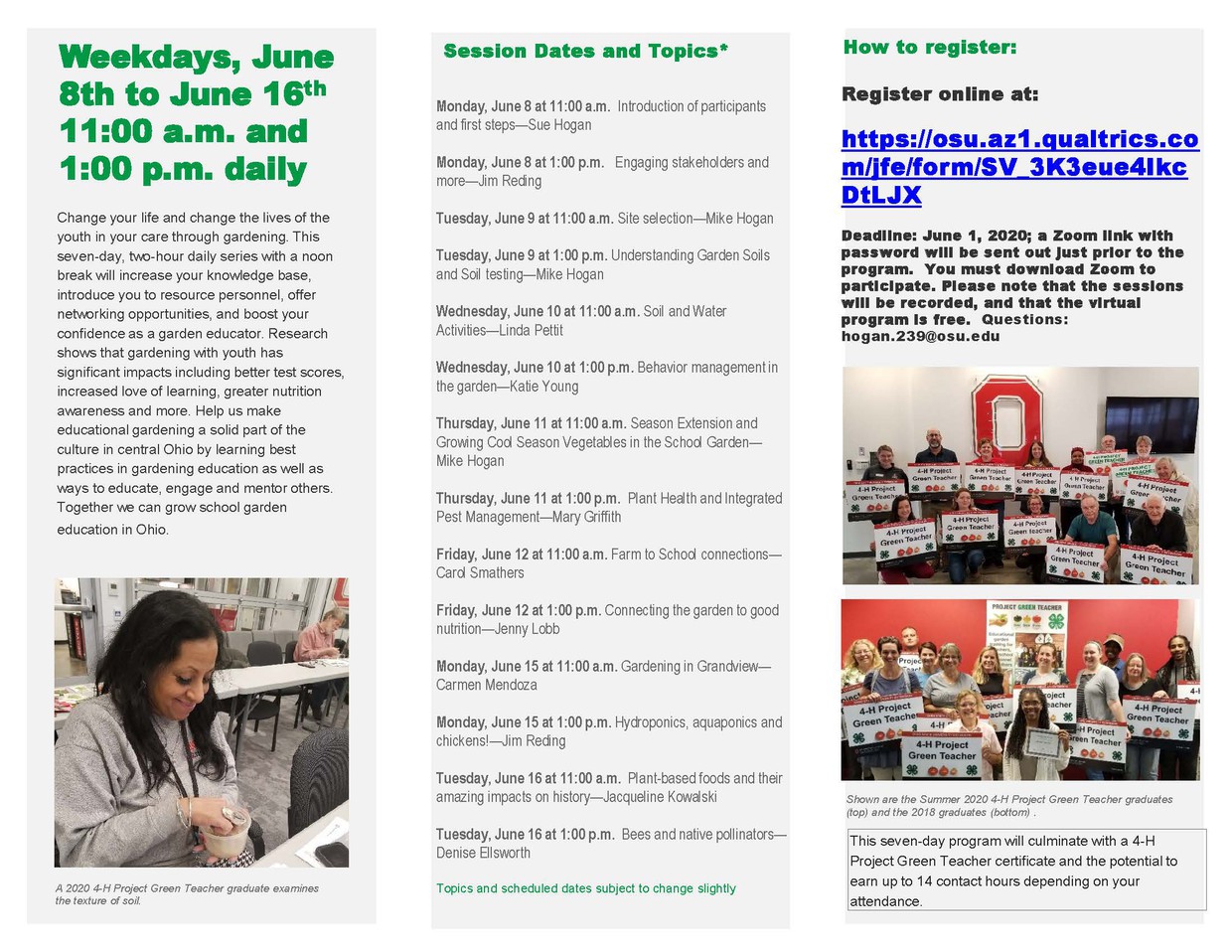 On March 11th the latest group of 4-H Project Green Teachers "graduated" from the school garden series. Started in 2014 and taught by OSU Extension personnel and area partners, to date nearly 160 plus teachers and others have completed the series. 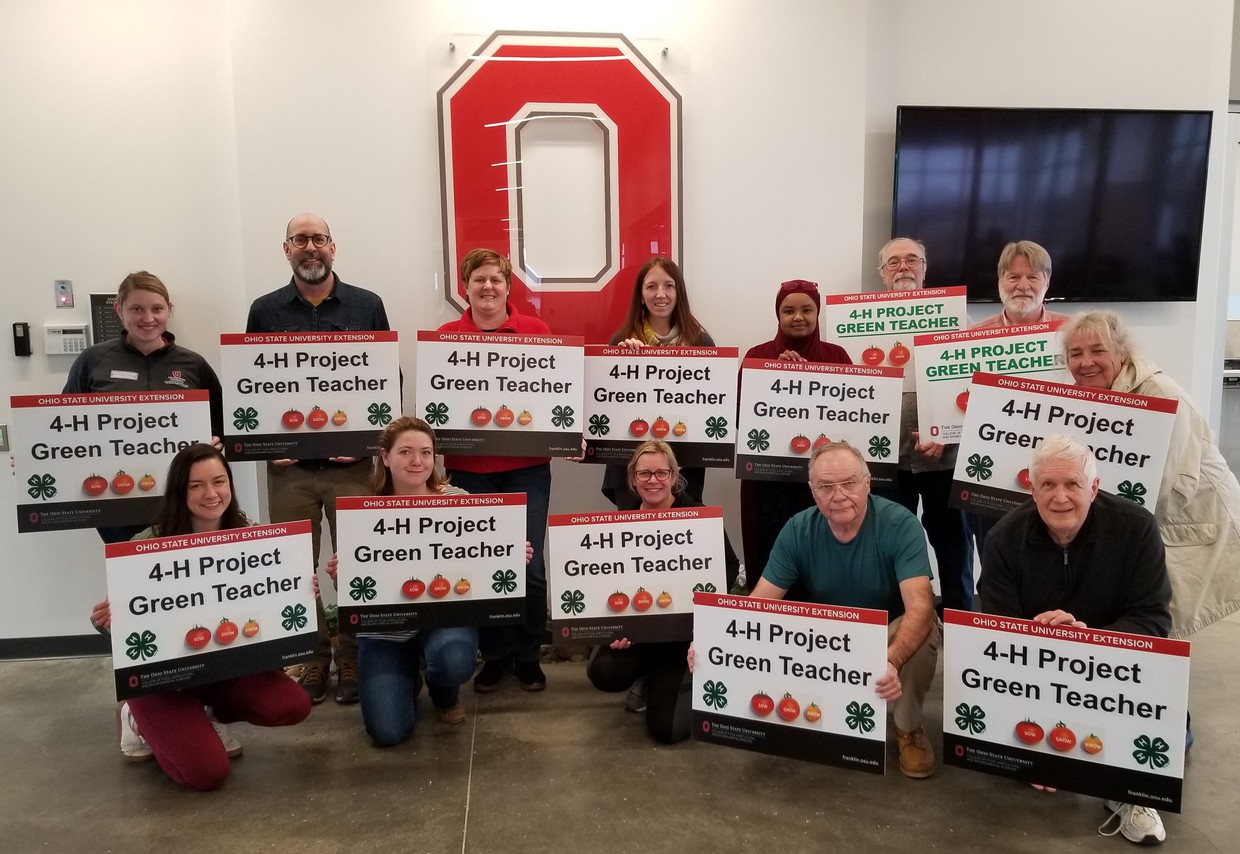 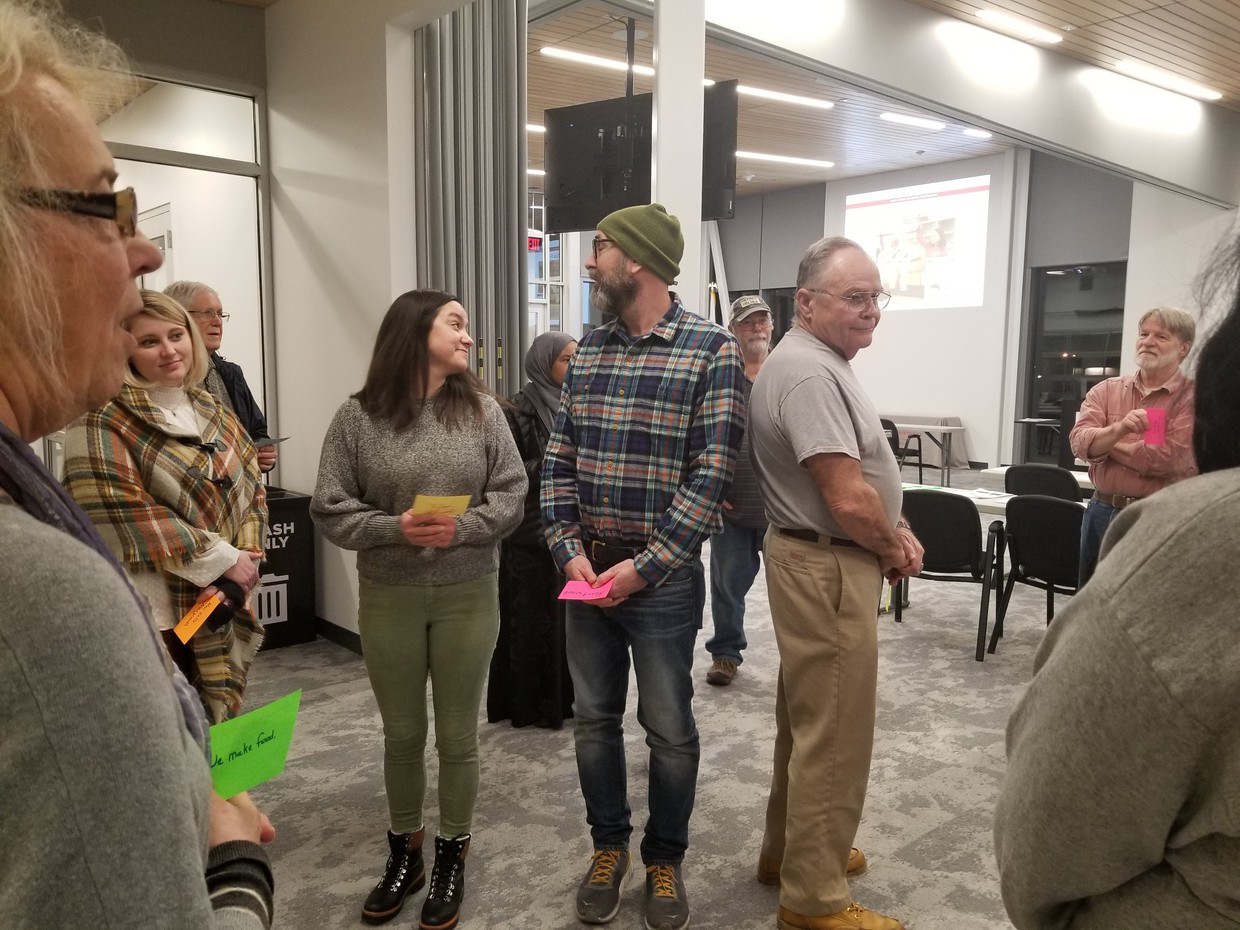 The date of the school garden conference for 2020 has changed from October 23rd to Thursday, October 15th. The event will be held at the 4-H Center pending updates to the social distancing protocals. Cost of the event will be $65. A call for presentations and a registration website will be posted soon. 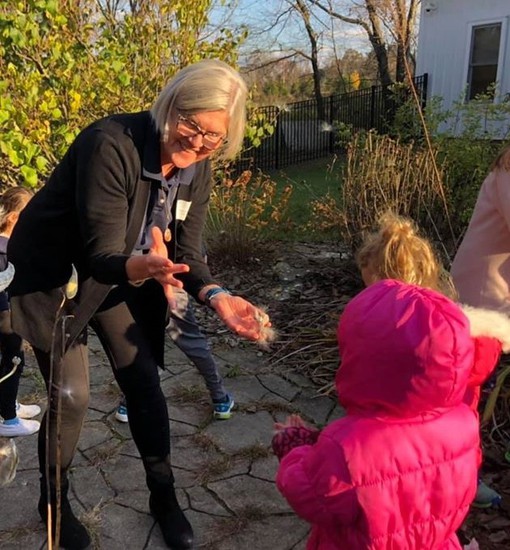 How did you get started? After my Mother and Father passed away, I needed to share their legacy, a love for nature, with my students. A Butterfly Garden was the answer and still provides our school community with a place to remember loved ones annually. We release butterflies after studying them during a community wide annual celebration of life.

What was the most memorable moment you had teaching your students in the garden? There have been many! But the most gratifying has to have been when my students grew, maintained, harvested and then delivered produce to seniors in need in our community.

Why is school gardening an important educationaL tool for teachers? Truly, a garden and nature provide teachers with “a place” that is engaging for students to learn educational content. Connecting a lesson, based on Content Standards, to the environment, nature or a garden excites and engages students. At a time when sitting in front of screens has increased, going outside to engage with nature is necessary, and I believe essential for the health of children.

What advice do you have for those wanting to start a school garden? I believe it is important to start with one project at a time; one project per school year was my rule of thumb. Also, recruit a team of advisors: students, teachers, administrators, parents, support staff, community members to help decide on and follow-through with projects and maintenance. School gardening is relational; seek support from your community and share your message as much as you can, this is important not just for volunteer support but also important for funding future projects.

How are you planning for long term sustainability of the garden once you retire or take on another position? By embracing an Advisory Team approach where the goals are shared and embraced, one person is not the “glue” that holds it all together. The person who started the journey becomes an advisor/tour guide for future teachers. Teaching others about the lessons and gifts a garden can provide a community/school is another important role for the Garden Coordinator.

The Humble Dandelion: A Lesson in Tenacity 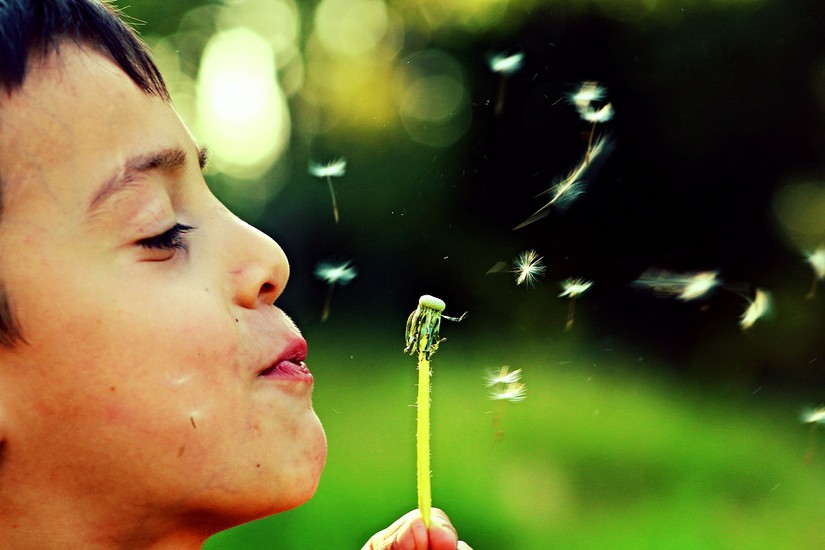 Could there be anything more tenacious than the dandelion? It goes from a spiky yellow-haired child to a grey balding old soul in the course of a season. One of the first precursors of summer fun yet to come, it is maligned by many because of its ability to grow despite all odds. Case, in point...you have probably seen one growing up through the cracks of a sidewalk.

The dandelion is actually a member of the Sunflower family. It's origins are probably Eurasian, but it is now found in all 50 states and over 60 countries. The name comes from the French 'dent de lion' meaning lion's tooth, and refers to its jagged leaves. The dandelion offers a lesson in persistence. Sunlight and moist soil make it a happy camper in your lawn or garden. In Ohio you will find the flowers from April to May for the most part; but they can start as early as February and last until June. It is estimated that a single plant can produce 3,000 to 23,000 seeds.

Dandelions are perennials. In the fall they may seem to die out, but they will return the following spring. They actually have very long taproots that can grow up to 12" long. The roots will store food for the plant over the winter. The stems grow straight up and can reach heights of 12" as well. When mature, the hollow stems will secrete a milk-like juice if they are cut. Bright yellow flowers are 1-2" across, but soon turn into fluffy white seed heads, just right for making wishes.

The dandelion is also edible, and you can eat the greens and petals. Dandelion tea, coffee and wine are also inbibed. Only eat plants that have not been treated with fertilizers, chemicals and pesticides. Wash well before eating.

Every dandelion is actually home to hundreds of individual flowers grouped together. Dandelions can reproduce both sexually by being pollinated, and asexually. For this reason, every single seed emerging from a dandelion’s head can have a different genetic makeup.

The aerodynamics of a dandelion seed can also be explored. Research from the University of Edinborough has found that the flight of the dandelion seed has not been seen before in nature. One of the world's best flyers, air moves in and around the parachute-shaped bristles that are bundled together, enabling the seeds to fly great distances. This porous parachute might serve in the future as a model for small drones that do not require much power.

Following up on this study, scientists at EPFL (Swiss Federal Institute of Technology) conducted experiments and then reported that " Our model calculated that the maximum number of bristles for stable flight is around 100, and surprisingly, that’s approximately how many bristles the seeds naturally contain.” This study of how mechanisms occur in nature is termed biomimetics.

In short, the dandelion is more than just a humble little weed. 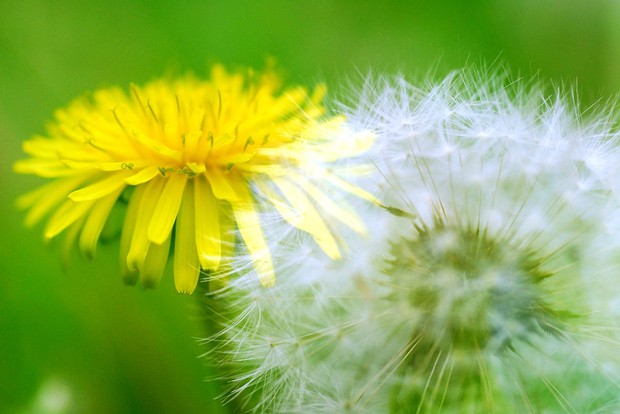 The Circle of Life: Exploring the Life Cycle of a Dandelion Using Hula Hoops and Other Teaching Methods

From simple pre-school experiements to elementary art projects, the dandelion is a worthy candidate for study. Following is a curriculum activity for youth, which can be as simple or as complicated as you like:

When dandelions are in season find a secluded place in the schoolyard where there is not a lot of foot traffic. Also find a spot that has not been treated with lawn products. Divide students into groups and give each group a hula hoop. The groups will then place the hula hoops on a portion of the ground where there are new dandelions. The hoops will be left in the same location until the dandelion life cycle ends or school is out, whichever comes first. Each day the student groups will explore the dandelions and record changes. They can keep a record of weather effects, sunlight, insects, the number of dandelions within the circle, flight patterns and more. Hypotheses can be formed in advance. Tests can also be conducted to see if certain things can affect plant growth, etc.

Exploring the word origins of the plant in other languages can also be fun.

A simple example of the dandelion life cycle can also be represented by dividing a paper plate into sections and drawing each stage; from seeds in the ground to seeds in flight. Creating a simple whirlygig or parachute will also serve as an example of seed flight and dispersal. You can also explore ways that seeds move, other than by wind, and engage in the engineering design process to simulate seed flight and seed dispersal. Compare and contrast the helicopter-like flight of the maple seed to the parachute-like flight of the dandelion.

Follow up studies with older youth might include discussions about the need to eradicate dandelions from our lawns, and what this says about us as a society and what we value. 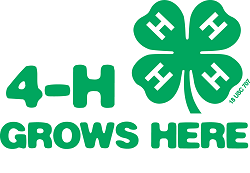 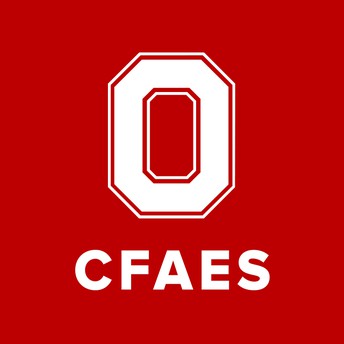 Facebook
4-H Project Green Teacher is an informational newsletter and series for educators and others that focuses on school/educational gardening. It is brought to you by 4-H personnel who work for Ohio State University Extension in Franklin County, Ohio, a part of the College of Food, Agriculture and Environmental Sciences (CFAES).

CFAES provides research and related educational programs to clientele on a nondiscriminatory basis. For more information, visit cfaesdiversity.osu.edu. For an accessible format of the publication, visit cfaes.osu.edu/accessibility.

Follow Susan Hogan
Contact Susan Hogan
Embed code is for website/blog and not email. To embed your newsletter in a Mass Notification System, click HERE to see how or reach out to support@smore.com
close