2) The bent over policeman is rummaging through the Asian woman's purse that he stole from her, possibly looking for something that will get her sent to jail, because during this time period all of the U.S. citizens were mad at the Japanese and wanted them punished for what they did at Pearl Harbor.

3) The woman has a small suitcase which maybe because she had so little time to grab her clothes before she was forced out of her home and into a shack in the middle of the desert.

4) The children look at something in the distance or maybe searching for someone, that someone could be their parents or a loved one that they lost and were no able to go look for and none of the policeman would help them.

5) All of the Japanese people are dressed in their nicest clothes, the clothes that the average U.S. citizen would wear, to show that they will keep their pride and their devotion to the United States. The citizenship that they have earned is being striped away from them as though it were nothing.

U.S. citizens did not want to see or even think about Japanese people after the bombing of Pearl Harbor. The only thought they wanted of the Japanese was the one of them losing the war and raising the white flag. The U.S. citizens feeling reflected anger and wanted to hurt the Japanese for what they did to to them 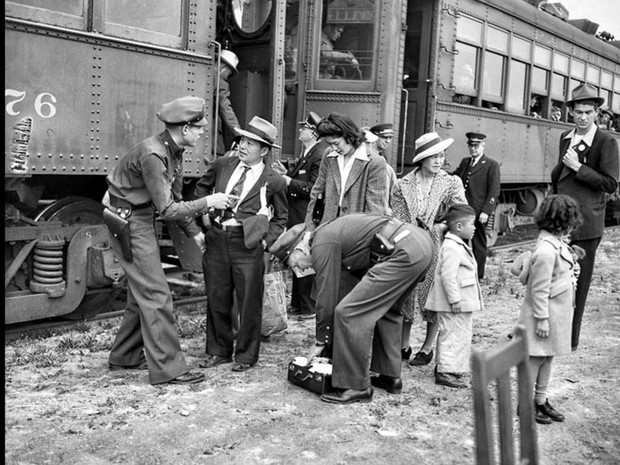