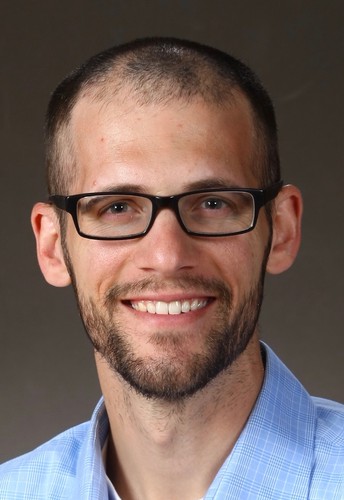 From the Assistant Director

The long and hot summer is coming to a close which means the new school year is just around the corner. I am thrilled to welcome back our students on August 19th and start the year, which is sure to be one of our most growth filled, fun and fulfilling years yet!

This week the faculty returns to for a week of orientation in order to prepare themselves for the 2019-2020 school year. This year we welcome six new and enthusiastic faculty members who will be introduced in the newsletter below! We also welcomed 40 fantastic incoming students into our community at our new student orientation on Monday.

On Thursday night, 20 CDS faculty members traveled to Chadwick for a lecture by Alfie Kohn, who is one of the most progressive and world renowned educational thinkers. It was a great talk concerning homework and school policies which got us all thinking about how we can improve our classroom, school and wider community.

The first week of school will mark the start of our student organizations and sports programs. We have a number of exciting schedule changes that we hope will enhance students wellbeing and academic achievement. These are changes that were based on student and parent input at the end of the year last year. If you are interested, you can check out all the changes in our digital student handbook. It is sure to be a busy but exciting first week for our students!

Following the first week of school we invite our parents to join us for our "Back to School" event. From 5:45 to 8pm on August 27th we would like to give you a chance to meet our teachers, walk from class to class like your child, and find out more about what is happening in 2019-2020. (More information below)

In closing I would like to take a moment to recognize and congratulate all students who made it onto the CDS Honor Roll last year. I would also like to congratulate our 2018-19 6C award winners and nominees. I am so proud of you all for embodying the core values of our school!

It is a new year filled with a great deal of hope and promise! I can't wait to get underway! 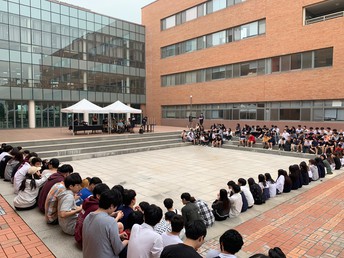 All award winners were selected and voted upon by the CDS faculty. Awards were given during an assembly on the final day of the school year.

"We believe the Sally Kim is well deserving of the award for Character. The past three years she has been one of the hardest working students at CDS. In that time, she has not once complained about schoolwork and has never missed an assignment. She has worked behind the scenes in groups and clubs never seeking attention but completing the work that must be done. She has challenged herself by creating the National History Day in Korea club with Jasmine Kwon and taking on the role of vice-president. In that capacity she has led meetings, coordinated some of their events and has shown an ability to lead. She is kind, genuine and embodies the definition of character in her day-to-day interactions with students and teachers." - Mr. John Talbot

"I don’t believe that I can put into words how instrumental Jasmine was in completing a successful NHD program. Over the summer she co-created an NHD club and in the first week of school we sat down to work out the logistics of planning this contest. She was without doubt an excellent leader; she brought together a diverse group of students within the club and divided responsibilities each week. She met with me on a weekly/daily basis to finalize orders, distribute materials and share ideas. This student led an NHD seminar for the middle school and worked with students in other schools to promote the NHD program. The NHD program was a success this year mainly due to the work and leadership of her and her club. I cannot think of a more deserving individual for this award." - Mr. Matt Riniker

"Ryan hosted/MC’ed several games and events this year He is fearless, calm and collected and has shown great growth in his confidence and character. This year he stepped up and out of his comfort zone as the face and talent of the Walk in The Park web series that was designed and produced for entertaining the CDS community. He comfortably conducts interviews with various guests of all different age groups and status. As the host of the program, his charismatic personality launched him into becoming a “local celebrity figure”. As a result thereof he had his first fan meet/sign at the Carnival/Sports festival this year. He was extremely professional, treating everyone with the same kindness, respect and friendliness." Ms. Jana Nortier

"Edward is not afraid to ask questions. His goal is to understand, research and grasp concepts, content and knowledge far beyond what is expected from him. He investigates issues in his free time, writes essays and study topics, sometimes only for personal interest sake or to enrich or enlighten his perspective on something. He is a curious guy looking at the world through a looking glass." - Mrs. Rebecca Laders

"In the past three years Minju has demonstrated her ability to think critically through written work and class discussions on a daily basis. Continuously impressing her teachers with her ability to understand, analyze and apply her knowledge to her work and projects. Her ability to write clear, concise, analytical essays that eloquently portray certain nuances has been captivating. She continues to look for ways to improve and is a profound thinker that truly deserves this award. Her sharp thinking and reasoning abilities allow her to craft strong arguments about any number of topics and this shows her excellent critical thinking abilities. " - Ms. Lindsay Maguire

"Collin is kind, friendly and someone who truly cares about his peers and community. His drive to improve a school problem by using positive and supportive teaching methods is impressive and commendable. This past year he took the initiative to create a student organization, Addiction Science in Action after seeing that smoking and vaping were becoming an increasingly seriously problem at CDS. This student worked hard to lead other students and create a positive culture of health in CDS and for this reason we believe he deserves the community award." - Ms. Taleen Brady 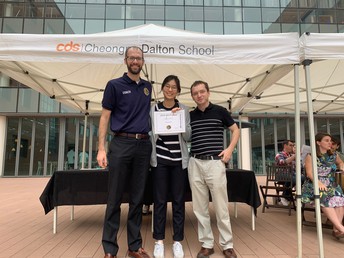 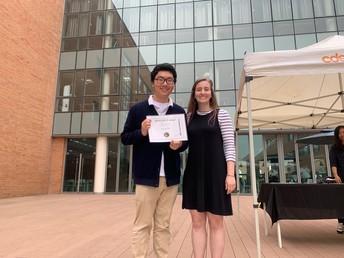 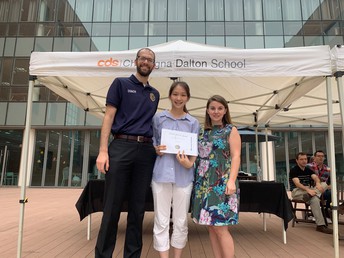 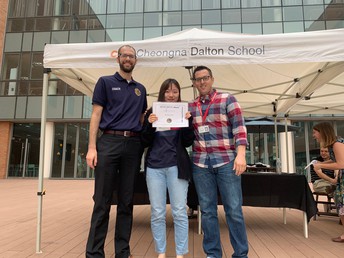 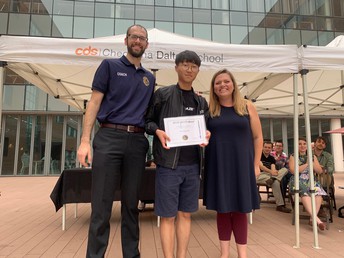 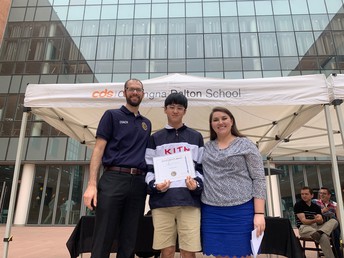 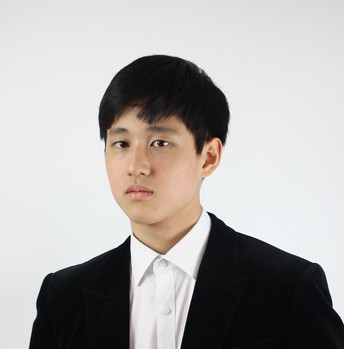 The school community would like to recognize some outstanding student achievements at this time! Congratulations to all of our Honor Roll students in 2018-19! 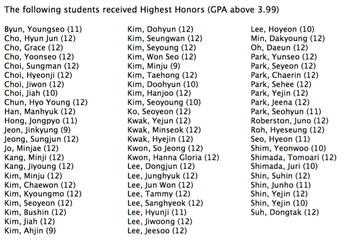 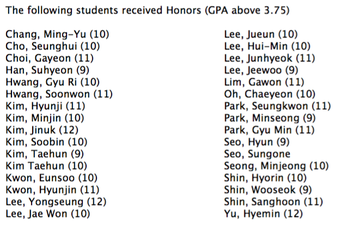 A Look Ahead: CDS Week 1

We are excited to welcome 6 new faculty and 2 new staff members to our family. In the following weeks we will be doing a newsletter spotlight on them so you get a chance to meet them and hear how they plan to enhance our culture and stimulate our students intellectually. 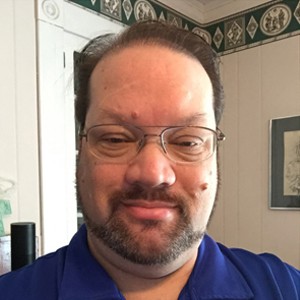 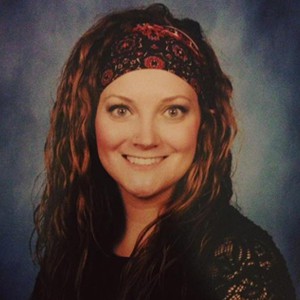 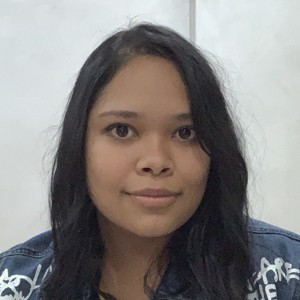 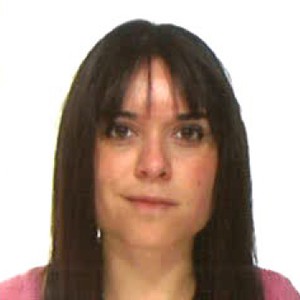 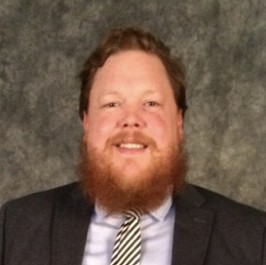 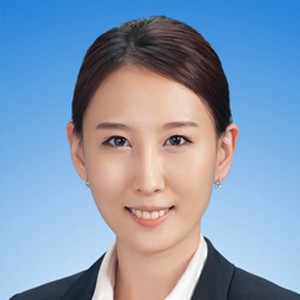 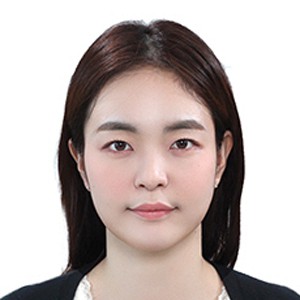 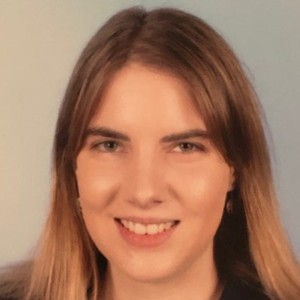 This years Cross Country team hopes to continue to make improvements after their best season yet in 2018-19!

If you love running, competing, community and fitness then join! If you have any questions please reach out to the head coach: Mr. Chris Martin (cmartin@daltonschool.kr)

Last year the program made big gains despite having a young team. This year they look to continue their growth! Tryouts will be held on Monday (8/19) and Wednesday (8/21).

If you have any questions, please reach out to this years newest head coach: Mr. Cheyenne Reed (Creed@daltonschool.kr)

Graduating very few seniors last year, this group is really exciting to watch. Mr. T has coached the team for a very long time and is dedicated to helping every player reach their potential. Tryouts will be held on Tuesday (8/20) and Thursday (8/22).

If you have any questions, please reach out to this years newest head coach: Mr. Craig Tronsgard (ctronsgard@gmail.com) 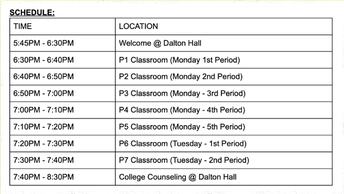 I hope all of you have had a fantastic summer vacation full of rest and relaxation. We are so excited to welcome all of you back to CDS for another fantastic year of growth in the 2019-20 school year.

CDS teachers have been working hard over the summer to develop their lessons and create a positive learning environment where all students can achieve their learning goals.

Together we will do our best to help students to grow academically and develop the 21st century skills they need to be successful in high school and beyond. We will discuss this in more detail during our upcoming Back to School Night event.

We invite you to attend our Back to School Night on Tuesday, August 27th from 5:45 to 8pm.

This year the format for our class will be a little different. Instead of three nights for various grades, we will be doing a single night where parents get the opportunity to meet each of their student’s teachers in their classroom. You will want to have the ability to look at your student’s schedule and classroom location on Powerschool (This will not be available until early August). You can see the schedule of events below.

Come find out about how we plan on helping your child succeed and how we can be partners in this endeavor. This is a great opportunity to strengthen our community and an important one in the start of a year long journey.

We are thrilled to have your students join us this year and I hope to see you at the event!

Please do not allow your lack of English stop you from joining us. While we can not accommodate all parents, we generally have 5-10 student volunteers who can follow you from class to class and translate for you. If you need their services please do not hesitate to reach out.

We also encourage you to bring your own students who can help you as well. 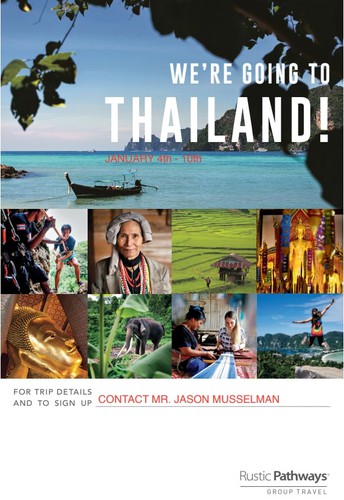 Every year CDS students join Rustic Pathways on a service trip! Our school motto is "pioneering to serve!" and we hope to continue to give back to the community yet again this year.

Mark your calendars for January 4th and join your peers to Udon Thani, Thailand! Help those in need, learn about Thai culture, bond with your friends, earn community service hours (60 are required to graduate) and have a great deal of fun!

We will start at 6pm in the Small Theater.
Get Directions 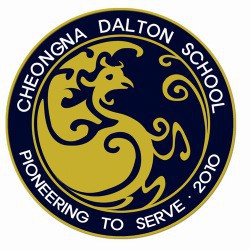