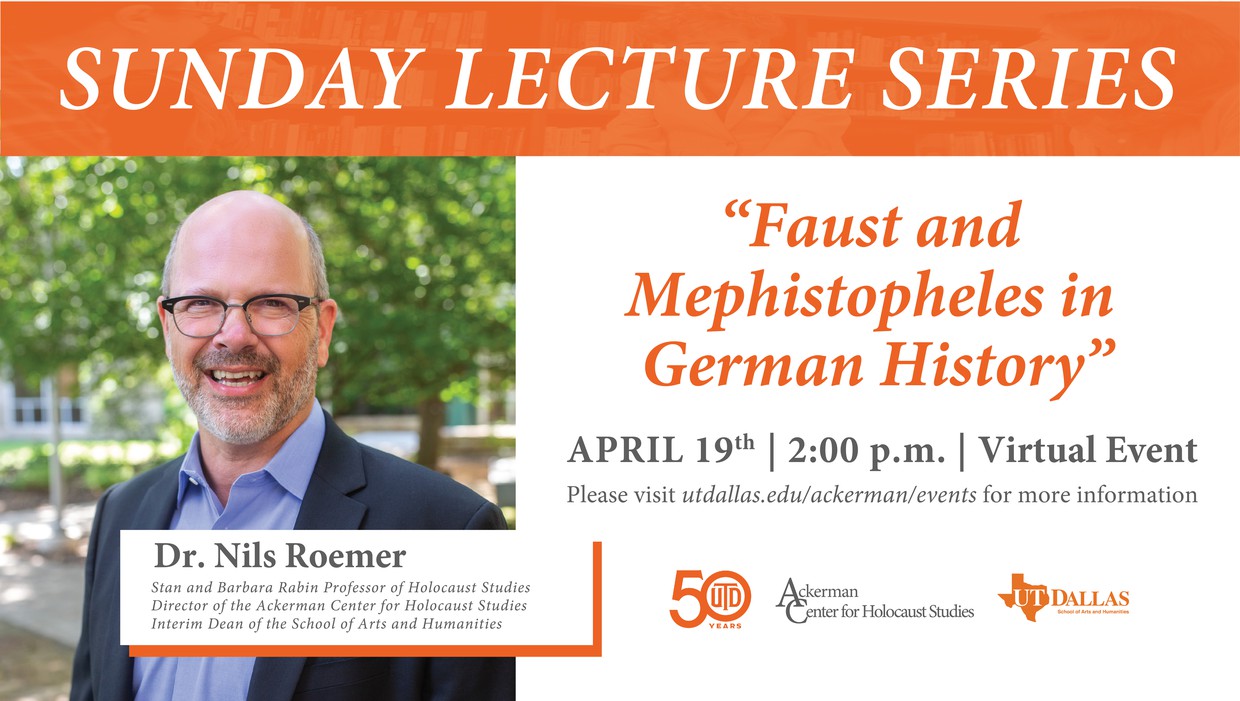 Dr. Nils Roemer, Stan and Barbara Rabin Professor in Holocaust Studies, Director of the Ackerman Center for Holocaust Studies and Interim Dean of the School of Arts and Humanities at The University of Texas at Dallas lectured on “Faust and Mephistopheles in German History” during the second installment of our Annual Spring Lecture Series. Both virtual lectures have been well-attended.

Dr. Roemer began his lecture by explaining that the legend of Faust has penetrated every cultural space, though representations and interpretations have not been uniform.

He asserted that Goethe’s Faust, originally published in 1808, was neither about Jews and Germans nor was it anti-Semitic. Though the text would later become associated with such prejudice and appropriated to promote Nazi ideology, such a reading is “one that must be forced upon the text,” Dr. Roemer insists, adding “while this view was important for Nazi propaganda, it has not been a particularly popular one.”

Contrary to Nazi depictions of Mephistopheles as a Jewish devil, Dr. Roemer explained that, in Goethe, he “is seen in many ways as a quite positive character… [he] is a cultivated, witty, and cynical exponent of materialism and nihilism. He is skeptical, but his observations about humanity and the universe are usually right.” Thus, this Mephistopheles is quite at odds with later characterizations of him as a Jewish world-menace.

Nonetheless, anti-Semitic interpretations of Faust appeared as early as 1862 with the publication of “The Jew Eater,” a satirical response to Wilhelm Marr, who coined the term “anti-Semitism” to distinguish modern hatred of the Jews from earlier religious Jew-hate, and who was, at the time, editor of the newspaper Mephistopheles.

Later, during the reign of the Third Reich, the legend of Faust became incorporated into Nazi ideology. It is during this time, explained Dr. Roemer, “as the ideology of race, blood and destiny became popular in Germany, that Mephistopheles comes to be characterized as Jewish, while Faust is said to represent German qualities,” and according to Nazi ideologues, “Faust is searching not simply for meaning in his own life, but for society – German society.” Cast in this light, “the struggle of Faust becomes representative of the dynamic German struggle for world-power rather than for individual meaning and happiness. Faust’s yearning for meaning and happiness is now Aryan yearning for meaning and happiness, which means conquest.” In this interpretation, Faust is appropriated as an advocate of Lebensraum.

Dr. Roemer mentioned also that Hitler himself wrote about Faust and Mephistopheles in Mein Kampf, characterizing their relationship as one representative of the opposition between Germans and Jews.

One of the most famous versions of Faust, other than Goethe’s, was penned by Klaus Mann in 1936. Dr. Roemer pointed-out that this version reflects the legend in a time of moral crisis by “offering a portrait of an actor who ingratiates himself with the Nazi regime in order to advance his career. This ‘devil’s bargain’ helps him become Germany’s most celebrated actor, but he ultimately realizes that he has become morally compromised with evil.”

Little more than a decade later, in 1948, Thomas Mann produced still another version with his Doktor Faustus, which was, according to Dr. Roemer, “the most notable post-war treatment of the legend” in which “the protagonist is a composer who renounces love in exchange for heightened creative power. The novel explores how nihilism and primitivism take over bourgeois culture. The degradation of Mann’s protagonist becomes a metaphor for Germany’s moral corruption.”

Between the two versions from Thomas and Klaus Mann, “we see how the story is explored in order to come to terms with larger questions about German history” even though “where it began was somewhat different.”

In 1981, the movie Mephisto, based on the novel by Klaus Mann, was released. In the film, Dr. Roemer tells listeners, “a historical German actor, who was very popular during WWII, is portrayed as having succumbed to the Nazi regime, forfeiting his moral integrity to advance his career.” The film's Hungarian-born director, István Szabó, had previously presented the annual Burton C. Einspruch Holocaust Lecture Series.

More recently, Dr. Roemer reminded attendees, Dr. Zsuzsanna Ozsváth, Leah and Paul Lewis Chair of Holocaust Studies and Prof. Frederick Turner, Founders Professor of Arts and Humanities at The University of Texas at Dallas collaborated to produce an original translation of Goethe’s Faust, for which they provided a reading last fall.

During the question and answer session, Prof. Turner offered the observation that “One of the things that Faust learned in his journey, and he learns from Mephistopheles, is to ‘get woke’ as people say these days.” Dr. Ozsváth provided the insight that “one of the main points of Goethe’s Faust is that the dangers we face are often so intertwined with that which can save us that they are often one and the same.” 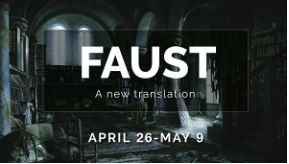 Please join us for the School of Arts and Humanities’ production of Faust, based on the new translation by Dr. Ozsváth and Prof. Turner in what Dr. Roemer says that he believes “will be a historical first.” Rather than the originally-planned stage production, the play is being creatively reimagined in an online “radio play” that will be divided into 20-minute segments. Faust will be available online for only two weeks, starting April 26th.