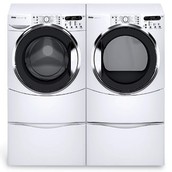 A annoying case for one such as this local girl..

On October 10, 2013, Ali bought a Kenmore washing machine at the local Sear's and it has already broken. The local girl went back to the store and asked to speak to the manger, which she got to do. She was told that a mechanic was going to come and fix it but she found it unjust,
"The washing machine was brand new and it should not need such repairs!" She told the reporter. She wrote a complaint to the Consumer Relations Department of Kenmore and was denied a new washing machine. Ali now contacted Consumer Product Safety Commission and found out the washing machine was on recall. The case is now in court and we wait for the results.