What is a volcano?

A volcano is a break in Earth's ground and hot, liquid rock from really far below the ground pours out of it. The liquid is called magma. A volcano is made when magma from Earth's mantle comes shooting through a break in the crust and goes toward the surface. It takes Earth about thousand and some times millions of years to form a volcano. The second tallest volcano is Kilauea and it rises over (4,000) feet, and (1,219m) above the sea. It's really located on the hill of an even bigger volcano called Mauna Loa! Both volcanoes erupt, but Kilauea erupts more.

Underwater Volcanoes has two kinds of shrimp loihi, and more kinds of animals like limpets, barnacles, and crabs. there's nutrients that comes from the hardening lava. Including coffee, grape vines, and moss.

Hawaii is a pretty state in America. This state is actually eight islands. Hawaii has warm climate, pretty mountains, plants that are green, and some tropical beaches. Each island has at least one volcano. Some are not active. Hawaii has two active volcanoes called Kilauea and Mauna Loa. Kilauea spits out red hot liquid rock almost every day. Hawaiian people who lived close this volcano are use to it. Kilauea has attracted many visitors from all over the world. Kilauea has been erupting since 1983 the lava cut off the road to Kalapuna!

Maps and Images of where volcanoes can be found

A map of where volcanoes can be found

A map of where all of the volcanoes can be found

A volcano bursting with lava

This is a volcano bursting with lava. Would you want to go here. 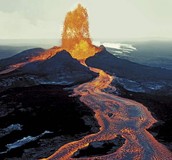 This Mt. Kalona. Its a very famous volcano.

This is all of the volcanoes through out the world.