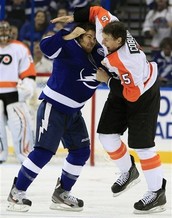 Steve Downie played hockey for the Tampabay Lighting but now plays for the Fliers. He is good right wing but he gets into alot of fights in one game. There was no dialogue heard and the out come of is fights were 5:00 mins in the penalty box same for other player. I think this happened because he is proud player and is competive and dosn't like being pushed.

Zdeno Chara Plays Hockey for the Boston Bruins. He is a good right deffense and has a powerful slap shot, he also gets into alot of fights. the out come for his behavior is 5:00 mins in the penalty box so does the other player. I think this happened because he is a big player and competative and the out come be it is regulation. 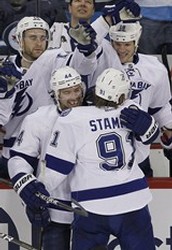 Steven Stamkos plays for the Tampabay lightning. He is a good center and good player last year when he scored his 60th goal against Winnipeg jets he did not boast about it and congratulated the goalie. The outcome is respect from his team mates. I think these things happened cause getting to sixty goals is a big deal exspeacialy when you are not greedy about it.

Patrick Kane plays for the Chicago Black Hawks. He plays left wing and he scored the winning goal for them in the stanley cup. He Showed Good sportsmanship by saying he could not have done it with out there help. So that result they won the stanley cup for the blakc hawks. I think these things happened because patrick is a nice guy and is not selfish.