billy is using Smore newsletters to spread the word online.

Get email updates from billy:

It is the matter that exists in the space between the stars systems in a galaxy. It contains gas in ionic, atomic, and molecular form, dust, and cosmic rays.

First Stage Of The Life Cycle

The first stage is a Nebula which is a cloud of gas, the gas cloud is hydrogen.

Birth of a star 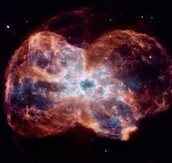 The Death Of A Star

Final Stage Of A Star 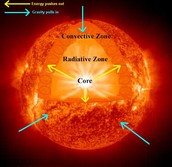 define equilibrium- a state when opposing forces or influences are balanced.

what two forces are in balance in this particular equilibrium? Thermal expansion and gravitational collapse.

What causes each force?

-particles that move really fast will start to create heat

The Birth Of A Star

After equilibrium is established, a certain nuclear process begins.

What is this process? red giant phase

Define this process. the star starts to burn other things in space then starts to essentially die.

What causes this process to begin? The star going into the red giant faze and running out of birthing material to continue to burn

Give an equation for the process that occurs specifically in stars. Identify starting materials and products

Identify the second phase of a star’s life cycle

What is this phase called? main sequence

What elements make up a star during this phase? hydrogen helium nitrogen magnesium sulfur iron

What happens during this phase? starts to burn up other elements surrounding it in the universe

What determines how long (or whether) a star will be in this phase? How long their hydrogen takes to fuse into helium

What happens at the end of this phase, in terms of nuclear processes? all the hydrogen fuses into helium and the helium core starts to contract while reactions happen around the outer shell but if the core isn’t hot enough to turn the helium into carbon the star will begin to dull in brightness and turn into a red giant.

Identify the third phase of a star’s life cycle

What is this phase called? Red giant

What happens during this phase?The star burns the helium in its core until it runs out and the outer layers drift away from the core as a gas type shell

What nuclear processes occur during this phase? Still have fusion, and not of hydrogen

What happens to the properties of a star during this phase (luminosity, temperature, volume) The star brightens much more than it was before. The temperatures also increase and it will increase in size substantially.

Identify the final phase of a star’s life cycle

When does a star die? It dies when it drifts away from the heat of the sun and the heat released from the star helps it evolve into another phase

Why does this happen? This happens so that the star can evolve and more stars can be born.

What are the possible ways in which a star dies? It can die from drifting away from the sun and losing its heat. It can die from the hydrogen running out so it can’t be powered. And it can die

When is a supernova produced? A big star runs out of fuel and collapses and the outer parts explode, destroying the star.

When is a planetary nebula produced? When a main sequence star grows into a red giant and ejects its outer layers.

The Role of Star’s Light

What does a star’s light reveal about its composition? Velocity along the line of sight. Such 'radial velocity'.

Give an example- The velocity of the planet around the star can be calculated using Doppler Spectroscopy.

How does a star’s light become red-shifted or blue-shifted? If the star is moving away it is Red shifted and if it is moving towards us it is Blue shifted.

What does this mean? This means that different elements pushing it out or in will emit different colors/spectrums of light

How could a star’s light be used as an example of the Doppler effect? The doppler effect is basically measuring the way something is moving and with the color spectrum from Red-Blue, with Red being moving away and Blue being towards us we can calculate just that using the Doppler Effect of a star.

The Origin of the Elements

Where do the elements come from? The most popular theory is that hydrogen and helium, the lightest and most abundant elements in the universe, were created during the Big Bang. All other naturally occurring elements were (and continue to be) made in the high temperature and pressure conditions present in stars.

Give specific examples for hydrogen, iron, nitrogen, and oxygen

billy is using Smore newsletters to spread the word online.