There are many benefits to learning the Spanish language. Becoming bilingual provides one with many opportunities in the outside world. Spanish is the second largest speaking language demographically in the world. Census research has estimated that by 2050, Spanish will be spoken by 10% of the US population, and the United States will be the largest Spanish speaking country in the world. 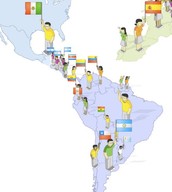 Spanish is one of the few global languages we have currently. Spanish is spoken in over 40 foreign countries across the globe. Knowing and understanding Spanish could benefit one who travels frequently to various foreign countries.

Studying a foreign language in one's academics can behoove them greatly in their future. In high school, taking a foreign language class will not only allow one to graduate, but will earn them credit in college. Being bilingual can also provide a wider range of job and career opportunities.