Get email updates from Giuseppe: 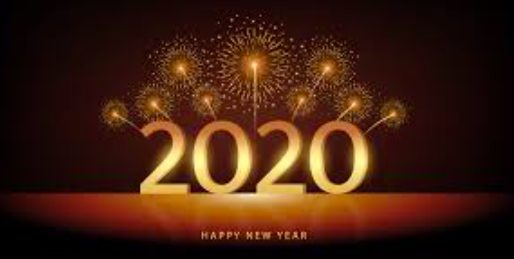 Information from the RIDOH

The Rhode Island Department of Health (RIDOH) is announcing that the flu is now “widespread” in Rhode Island. RIDOH is also reminding Rhode Islanders about seeking medical care if you or your child are experiencing flu like symptoms. RIDOH has information online for guidance on what to do if you are having symptoms of shortness of breath, fevers’ or persistent cough.

Per the Flu Information for Parents with Young Children | CDC, everyone older than 6 months of age should be vaccinated against the flu every year. Flu shots are available at doctors' offices and pharmacies throughout Rhode Island at no cost.

Remember, the best way to prevent the spread of illness is hand washing!!

Per District Policy, students should not be in school if they are actively vomiting, have a temperature of 100.5 or greater, have frequent diarrhea or have severe cold symptoms.

As always, please feel free to contact Mrs. Larned with any questions!

The Passing of a Great Man

As most of you know, Chariho lost its LEADER right before Christmas. Superintendent Barry J. Ricci passed away on December 22, 2019 after a courageous battle with brain cancer. Mr. Ricci served as Superintendent of Chariho Regional School District for nearly 15 years after joining the Chariho family as Assistant Superintendent in 2001. He was a devoted educator who put the well-being and success of his students first. Under his leadership, Chariho was recognized both locally and nationally for its scholastic excellence. Friends, colleagues, and students will miss him dearly. He will always be a Chariho Charger.

We will all rally behind what he has created the last 15 years and do what he would want us to do and that is to continue the great work we are doing for the students. This is what all of Chariho will continue to do! We will keep the light shining bright for all to see. Interim Superintendent Jane Daly will take the reins for the rest of this school year.

Below is our school's New Year resolution as we enter 2020. We will keep his memory alive by using the following acrostic poem. Mr. Ricci will always be in my heart. He was that kind of person for me professionally and personally. 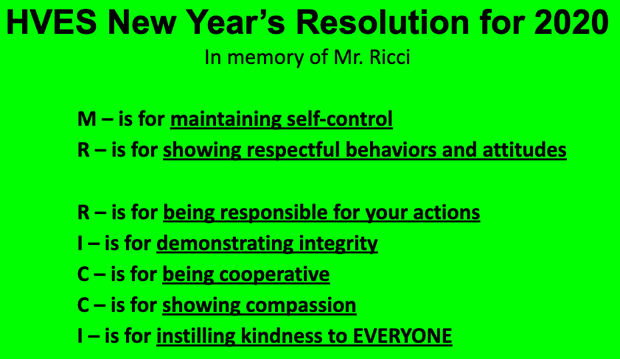 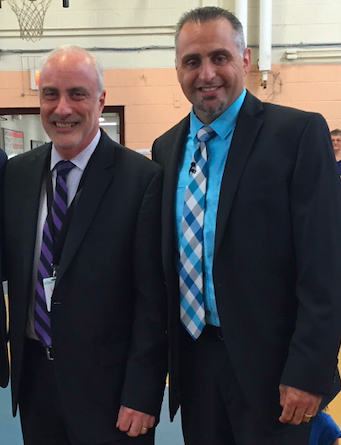 KICKING IT WITH THE ARTS! That is the name of our new school blog related to all the projects at Hope Valley School. Mrs. Girton and I will maintain this blog for now but after winter break the hope is to get some 4th grade students to lead this blog. Check it out by clicking in the link. You can read about some of our school projects and recent cultural assembly last week. Enjoy!

Differences between being RUDE, MEAN, or a BULLY

This was shared with teachers and staff and wanted to share it with all of you to help children understand the differences between someone being mean, someone being rude, and someone being a bully. From the article “Rude, Mean, or Bullying? A Child Therapist Defines the Differences” https://www.amightygirl.com/blog?p=20215&https=true

RUDE is “inadvertently saying or doing something that hurts someone else.” In children this takes the form of social errors like “burping in someone's face, jumping ahead in line, bragging about achieving the highest grade or even throwing a crushed up pile of leaves in someone's face.” The critical factor? “Incidents of rudeness are usually spontaneous, unplanned inconsideration, based on thoughtlessness, poor manners or narcissism, but not meant to actually hurt someone.”

Being MEAN involves “purposefully saying or doing something to hurt someone once (or maybe twice).” Mean behavior very much aims to hurt or depreciate someone.... Very often, mean behavior in kids is motivated by angry feelings and/or the misguided goal of propping themselves up in comparison to the person they are putting down.” And while Whitson agrees that both rudeness and mean behavior require correction, they are “different from bullying in important ways that should be understood and differentiated when it comes to intervention.”

BULLYING is “intentionally aggressive behavior, repeated over time, that involves an imbalance of power.... Kids who bully say or do something intentionally hurtful to others and they keep doing it, with no sense of regret or remorse — even when targets of bullying show or express their hurt or tell the aggressors to stop.” Whitson gives examples of multiple kinds of bullying, including physical and verbal aggression, relational aggression (like social exclusion, hazing, or rumor spreading), and cyberbullying. The key aspect to all of them is the ongoing nature of the behavior, which leaves the victims feeling powerless and fearful. 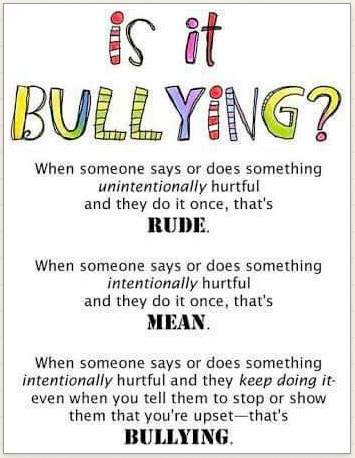 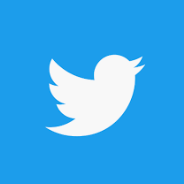 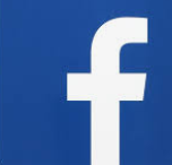 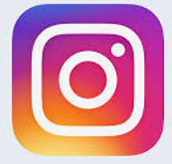 PTO meetings are typically the second working Monday each month. If you’re not able to make the meeting but still want to be involved please send an email to our PTO to make sure you receive a copy of the meeting minutes hopepto15@gmail.com.

Meeting dates for the year are as follows: 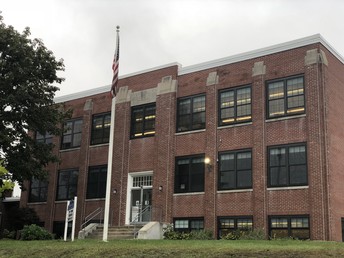 The mission of the Hope Valley Elementary School is to work in partnership with our colleagues, students and families. We are committed to creating a learning environment where children are expected to achieve their full potential.