Get email updates from Federica:

The Parish Boy's Progress, better known as Oliver Twist, is one of the best-selling books written by Charles Dickens. It was made into many films, one by Roman Polanski in 2005. It tells the story of an orphan called Oliver Twist, that at the age of nine enters the world of work picking oakum in a workhouse. The wretched conditions in which the children lived, prompt them to draw lots, so that the loser would've asked for some more food, taking on the responsibility of the little uprising. Oliver is the loser, and the administrators of the workhouse offered him for sale as an apprentice. After having refused to work as a chimney sweep, he is bought by an undertaker. Though the undertaker himself likes him, Oliver is mistreated by his wife, the maidservant and another young fellow; in the end Oliver runaways, heading for London. Here he meets a boy, Dodger, that offers him some (stolen) food and takes Oliver to the residence of an old man, Fagin. Here he lives with plenty young boys, and as Oliver recovers from the long journey, Fagin teaches him how to pickpocket. At first the kind boy, ignores the nature of these gestures, thinking they were making handkerchiefs and wallets, but when he is on his first real mission, he realizes they were thieves. Unfortunately, when Dodger and his mate are caught red-handed, they escape, leaving poor Oliver to be blamed. Luckily, the owner of the bookshop testify against his prosecution, and he is exculpated. Sick Oliver is taken home by the very man who had been the victim of the theft, Mr. Brownlow, who decides to take care of him. But Fagin, scared for his safety, decides Oliver must be brought back to his hideout. Other sufferings separates the boy from the deserved happiness, but eventually, he has his happy ending. The film is very well produced, and transports you in the grim and dirty reality of the Victorian Age. Though I think it's not very moving, but in the final scene, when Oliver tries to save the soul of Fagin, expecting to find a penitent man, and not the crazed but yet still materialistic. This very scene shows how pure-hearted Oliver is, and its dramatic nature is highlighted by the amazing performance of the Academy Award winner Ben Kingsley (Fagin). The movie (and the book) shows the atrocity of the Victorian Age, focusing on children's abuse. Deprived of any proper education, children had to work since early childhood, without being paid and well-nourished. They were not considered people, but objects, that could be sold and employed for dangerous works. Street children were also misled and introduced in an unethical world by corrupted men. They had to grow up soon and to act like adults, but the lack of education was a great limit, for their closed minds and absent values. Influenced by dodgy grown-ups, only the few like merciful and honest Oliver Twist, remain gentile, surviving the prevalent wrongness. It's noteworthy the scene when we see Oliver reading a book in the garden of Mr. Brownlow's residence, clearly he is just too a virtuous soul, not to be a reader. It's a good film, but probably the book is a great deal better. As (almost) always. 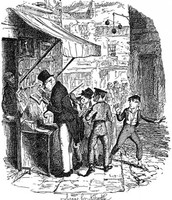