Just one of those songs that everybody knows.

Just one of those songs that everybody knows.

Try to convince us that you've never heard this song before. Go on, try. Yep, we didn't think so. "Billie Jean" is just one of those songs that everybody knows - even if they don't know they know it. But you could have heard it a million times and still not understood the lyrics. What on earth is "dancing on the floor in round"? And does the King of Pop have a son, or not? We've got answers to all your "Billie Jean" questions, and a high-tech, complex idea about why this song has stayed popular for so long: it's just plain catchy.

Explore the ways this song connects with the world

If you had any doubts about Michael Jackson's popularity, the publicity following his death in 2009 must have gotten rid of them. A world without Michael Jackson? That's like a world without sliced bread, or without Facebook... But it wasn't always so simple while Michael was rising to fame. The video for "Billie Jean" was, amazingly enough, the first video featuring "black music" that MTV ever showed. Black musicians had played so-called "white" music on the channel before, but music that fell into traditionally "black" genres - blues, soul, funk, hip-hop - had been completely ignored. Could we think about "Billie Jean," then, as one small coda to the Civil Rights Movement?

"Billie Jean" was topped the Billboard US singles chart for seven weeks straight.

"Billie Jean" was the third best-selling single of 1983.

The physical single for "Billie Jean" was certified as platinum in 1989, and the digital download of the song is closing in on that milestone as well, having already gone gold. 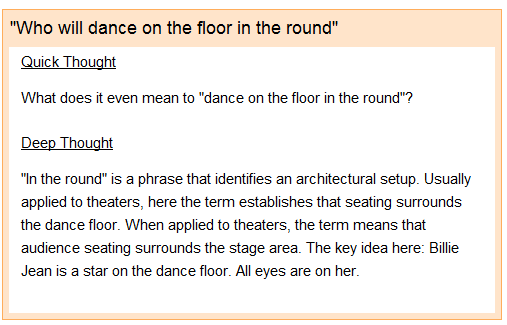 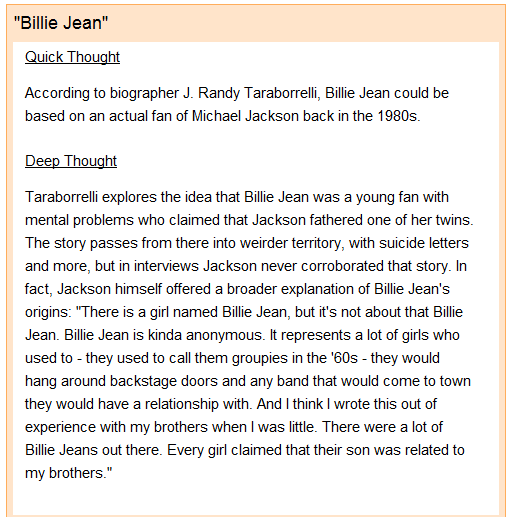 "Billie Jean," like "Wanna Be Startin' Somethin'," another of the four tracks Michael Jackson wrote himself for Thriller, showcases what would become a longstanding theme in Jackson's lyrics (and his life): paranoia and the pressure of fame. The lyric tells the story of Jackson being accused of fathering a son by a groupie.

Just like a dramatic monologue, the song has a clear audience. Jackson makes that clear when he warns, "So take my strong advice, just remember to always think twice." That audience, usually another fictional character in dramatic monologues, seems to be you (and us): Michael Jackson's listeners.